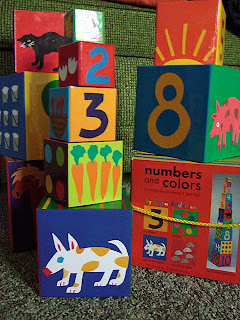 It's funny how visitors can help you see your own environment more clearly. Ranger and I hosted four under-3 friends for a play date last week. We all (adults and kids alike) ended up playing with 2 great nesting block sets by W J Fantasy.

The Numbers and Colors block set with colorful art by Sara Lee Anderson is a huge favorite of Ranger's. He likes numbers and counting- so anything with numbers on it is great. One side of the block has colored dots corresponding with its number, another side has the numeral, the third side shows an animal, and the fourth side shows a picture corresponding with that block's animal and number (e.g. the number four block has a rabbit one side and 4 carrots on the opposite face).

After a few minutes, we also pulled out the My Hometown block set so 7 people could easily play with the blocks. It has shops and other community features (train station, gas station, library, fire house). It's fun for imaginative play as well as stacking and nesting.

The blocks are pretty durable. They're cardboard, so don't expect huge feats of strength. They've held up well to over a year of appropriate play, but a destructive 4-year old could crush them all in less than a day.

They come in a rope-handled box which is useful as a carrying case and a storage box.

W J Fantasy has other great designs: a cool castle set where the insides of the box are castle rooms, a musical block set, touch and feel blocks, a great Jewish holiday set that turns into a (flameless) menorah, and alphabet blocks.

These compact, educational sets make great gifts as they don't consume a lot of household real estate yet they provide a lot of entertainment.

This is independent, unsolicited opinion of Baby Toolkit. We have no undisclosed relationship with W. J. Fantasy, Inc..
Posted by adrienne at Wednesday, October 17, 2007

Those are some pretty cool blocks. I'm sure my kids would have blast with them.

My youngest just turned one but is a cardboard-destroyer, so we got him a set (by Parents) of plastic nesting/stacking buckets from Target.

I'm not a huge fan of plastic toys, but these are great, and surpisingly my eldest enjoys them just as much as my little one!

I found an interesting history of WJ Fantasy, Inc. today.

They also have made some cool specialty blocks for the Golden Gate National Parks Conservancy.