Apple-tizing: Slice Up Something Tasty 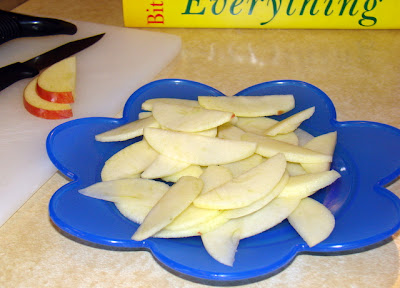 When our son started on solids, I found myself cutting apples a lot as he's carpophagus (not to be mistaken for coprophagous). When Jim noticed my apple-cutting technique he first said "Where did you learn this?"

I told him my mom always cuts my apples that way from infancy to well... now.

"You really are spoiled."

So, spoil your kids with delectable thinly sliced apples. I don't know if it's the greater surface area or the crunchiness of the thin chips- but kids dig apples sliced this way.

Peel the apple first if your kid's a prima donna about such things. Ranger is, but I left the peel on so the pictures didn't look like potatoes.

Cut alongside the core on the side away from your hand. Estimate where the core ends (I usually guess between 1/4 and 1/3 of the way from the stem to the edge). 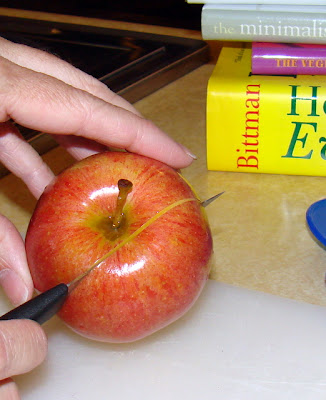 Lay the apple on the cut side and slice on both sides of the core. 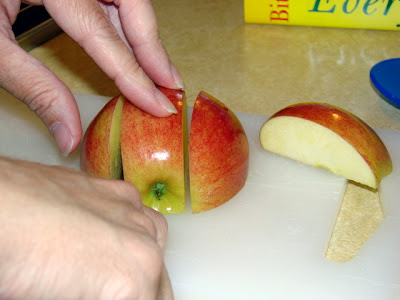 Lay the apple on a flat side (preferably with a core side toward your holding hand). Slice off the remaining non-core chunk. 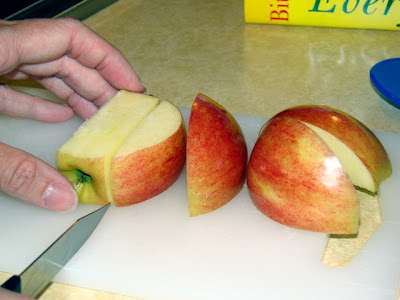 Check to make sure you didn't get to close to the core- like I did on one side (see the seeds?). 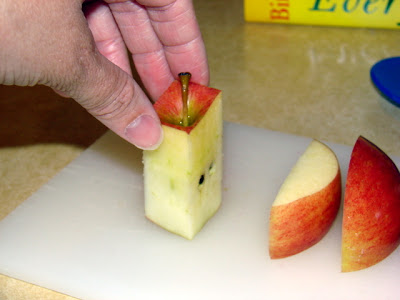 But the roughage (extra fiber) is easily cut away. 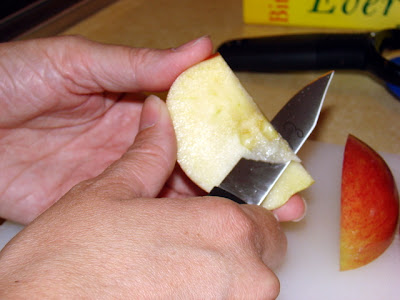 Then slice your apple chunks to thin or wafer-thin. 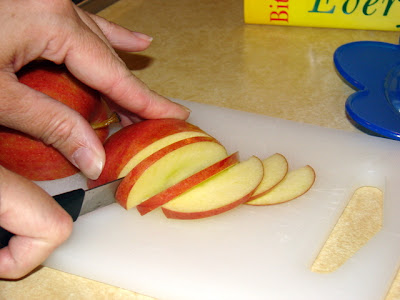 This style of cutting is great for some toddlers because it takes them longer to eat the slices. It makes a great time-consuming (for them, not you) snack. It also can extend a single apple among a greater number of kids in those didn't-get-to-the-grocery pinches.
Posted by adrienne at Thursday, October 04, 2007

See, I'm just lazy. I put the apple on the side and push an Oxo Goodgrips apple corer/slicer through it. As the name suggests, it cores the apple and slices it into segments simultaneously. It takes all of four seconds to make apple slices for my wee man's snack time/lunchbox/whatever. :D

anji: I that slicer too (which I used for Jim and I during the 11 years before Ranger was born). They're great!

LOL I use an apple slicer as well! And then I cut them down even more :)

Thanks for tagging me the other day! I have a new contest up at my blog, if you are interested!

I used to use an apple peeler-corer-slicer for my kids: they loved the spiral apple slices!

We have one of those circular slicers in a box in the garage. It was given to us shortly before we moved and I've never unpacked it.

At our local Fall Festival they have modified them to attach to power drills, and while it's a bit messy- it's truly a sight to behold and it makes some tasty slices.

Are they hard to clean?