Harness All That Energy: Our Argument (& Tips) for Kid Leashes 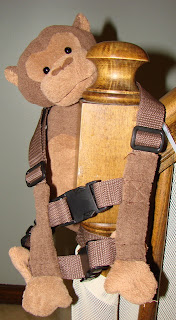 Earlier this week on Izzy Mom, I found an interesting discussion of toddler harnesses. Although I wrote a comment there, it struck me that I should talk about it here too.

Jim was a harnessed toddler. His family was living in a rural German outpost where the locals thought nothing of putting a kid in a lederhosen-suspender inspired harness. He remembers it as having little Bavarian Alpine costumed bears on the front. It's probably partially responsible for him living to be an adult.

His only negative memory of the harness was years after he no longer needed it. On their emergency return to the States after his grandfather had a heart attack, his brother was wearing during a long layover at busy JFK Airport. My worried mother-in-law was traveling alone (inter-continentally) with two young kids, so it was natural to leash the youngest rather than lose him in the enormous airport.

A stranger approached his mother and poured out vitriol about child abuse and treating her kids like animals. Jim's mom, already pretty stressed over her dad's health problems and the stresses of overseas air travel, broke down. Needless to say, that memory stayed with Jim.

When we created a baby registry for Ranger Jim happily scanned in the monkey backpack harness at Target (~$15). I didn't think twice about it.

Ranger took his time deciding to walk independently which meant monkey lived on a closet shelf for a long time. Eventually Ranger got better at walking, running, and bolting away. The stroller seemed counterproductive: while it contained an enthusiastic Ranger, it didn't give him any outlet for all that energy 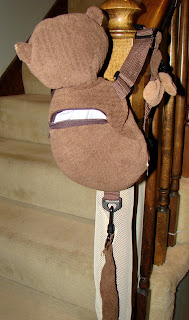 or enthusiasm for walking.

Monkey came down off the shelf, but I couldn't bring myself to put it on Ranger. So it sat on the kitchen table until Ranger took notice.

I picked up monkey and gave Ranger a once over. "Well, I guess you're old enough. Be gentle."

The words old enough coupled with hesitation were enough to make him clamor over to me hands out. "PWEEESE?"

Awww. So, I gave him monkey sans tail. They became fast friends while Ranger gave him the whole tour of the house. Ranger loves talking to monkey- philosophy, politics, recipes, whatever.

It was a major value added feature when Ranger found that Monkey could give him a hug and ride piggyback.

When I hooked on the tail, things were a little intimidating (to me). Definitely start your harnessed kid on carpet. The best technique I found was making a couple loops around my hand so I could feed out a little extra length when Ranger charged toward the end of the harness' reach. The extra length (delivered with a little resistance) helped him slow down and stay upright.

Ranger didn't mind the harness and leash at all. They helped keep him in close proximity, but harnesses still require good parenting skills. A harnessed child still gets to choose their direction (which won't always be the direction the parent chooses). The child can still sit down, refuse to move, or tug in a undesirable direction, so the parent needs to communicate with their child a lot for this to work. A parent must be willing to pace themselves with their toddler rather than expect the converse.

It was a major boon for independently-minded Ranger to be able to walk rather than be captive in a stroller. Because a toddler's stride is so much shorter than an adult's, a walk around the big downtown library is like a marathon. Our boy sleeps extra-long on days we get to walk a lot.

A harness may not have long period of use with every kid. After a few weeks Ranger realized that we wanted him nearby in busy places, so he sticks closer in normal scenarios. He loves wearing monkey as a backpack, so sometimes he wears into stores just for fun (with the tail packed inside). 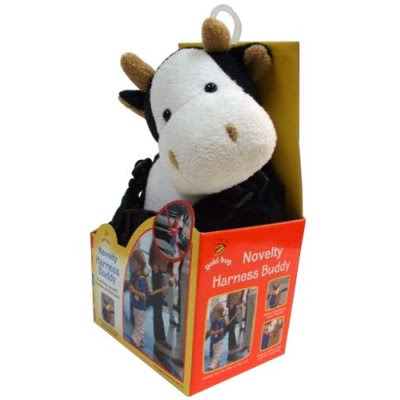 If your kiddo prefers bears, dogs, unicorns, cows, or fuzzy sheep, they make Harness Buddys of all those animals too.

We now use the harness primarily in places where he'll get excited and sprint off (zoo) or places where we're standing in a long line and don't have a free hand to hold (post office).

I haven't noticed people giving me the stink-eye, but I'm usually more focused on Ranger than the people around us. They can think what they want. Most people came over to make some "monkey on his back" comment. I think the opportunity to feel witty may have made people feel less critical about the harness itself.

One good friend thinks torso harnesses are cruel, but approves of wrist harnesses. In exploration of her theory, I tried a wrist harness on Ranger. He HATED it- flung himself on the floor and screamed- hated it. For him it was overwhelmingly frustrating to have more limited hand mobility. Maybe it's a family trait- because when I thought about it, it seems like a wrist harness would be more off-balance and obtrusive.

I think with the right harness and a team mindset that a harness/leash can be beneficial to everyone involved (kids, parents, innocent bystanders).

What do you think?

Baby Toolkit is the independent opinion of Jim and Adrienne Jones. We have no relationship with Goldbug or Eddie Bauer (makers of Harness Buddies) and have received no compensation for this independent review.
Photos by Adrienne Jones, 2007- all rights reserved.

Thanks for the link and of course, you already know I agree with you 100%

I don't have a harness for my little one, but I'm not necessarily opposed to the idea. My mother-in-law made one when my oldest was young, but it was a wrist-harness. And I agree that the wrist harness just seems unwieldy and more dangerous. I was afraid I might yank her off balance. It seems too tenuous also, like it could slip off (plus the fact that she made it out of a real leash did nothing to increase its appeal). I have always thought that the Harness Buddies were a good option. My little one would think of it more as a backpack, one of her favorite things ever.

We used a harness on our son when he was around 1-2 years old. We live in an urban area of Minneapolis and like to be able to walk to grocery stores etc, so having him in the harness was ideal as he was (and is) quite an independent-minded little guy. I would not use a wrist harness for the reasons other people have given, but Toby never had a problem with the regular harness.

I think we probably did get looks from other people, but we were never yanking him around and to be honest I'd rather get a look from time to time than have my son run into traffic.

The only time I've felt uneasy about kids in harnesses was once at a busy mall when a girl who seemed to be about 8 or 9 was acting up to a guy I assume was her dad - he put her in a harness and hauled her away. The onlookers were kind of shellshocked, needless to say. I'm guessing she might have had developmental issues or something, but it did seem a bit strange.

Kate E. said...
Hi Adrienne,
I found your blog a little while ago from the Parent Hacks blog. When I saw "Jim and Adrienne Jones" were going to be contributing I thought, "Hmm...I used to work with an Adrienne Jones at the Honors College and her husband's name is Jim." Lo and behold, it is the one and only. I am a chronic lurker on blogs, but have been meaning to say hello for a while now, so "Hello!"
I just wanted to chime in with my "two cents" and say that I think the Harness Buddies are great and since we are in Scotland now, I think it would be appropriate for my daughter to have a sheep one. We'll definitely be asking for that from the grandparents.
I enjoy your blog. Its good to see you and your family are doing well.
~Katie Ellis (Miller)
www.thegranitecity.wordpress.com

We used our ring sling as a torso harness when DS was 1-2 years old. It made it easy to give him some independence to explore while allowing us to keep him close. We found that he also learned to stick close after using the harness for awhile and now that he's 2, we no longer need it.

I LOVE the chest harness things. I used them on my first two and we are nearly ready to use it on child #3. I have gotten nasty comments about it, but only from people with no children. Every grandparent and parent I meet asks me where did I get that! I have very inquizitive kids and so the harness was good for their health and great for my sanity.

I first saw a little boy on a harness at a Busch Gardens theme park two summers ago. My little one was only a few months old, but I knew I had to have one. I asked the mother where I could purchase one, and she told me that she purchased hers at Wal-Mart. I ended up finding a "puppy dog" harness which my now two-year-old has named, Theo. Yes, I have had a few dirty looks walking through the mall, but Theo has been the best thing to keep my baby safe. She considers Theo her very best friend. All I have to say is that Theo is going to give her a hug and she can't wait to put him on. As she has become less patient in her stroller, Theo has afforded her the freedom to stretch her legs, and to show me things that she would like to look at, while keeping her safe and close to me. I believe that having the harness on your child will keep your child safe from harm. I have not had that many bad comments about Theo, but I would rather have the few, than have my baby lost in a mall or running out into a parking lot. I think my baby will really miss Theo when she is walking on her own. She really loves him.