Before we had kids, Jim and I rarely prepared meat at home. I'm slightly squeamish about it and we both benefit from a meatless diet.

Now that we have kids, I cook with meat more often. That means packages stored in our fridge. Sometimes those packages would leak and send me into a HAZMAT response.

Who has time for that? 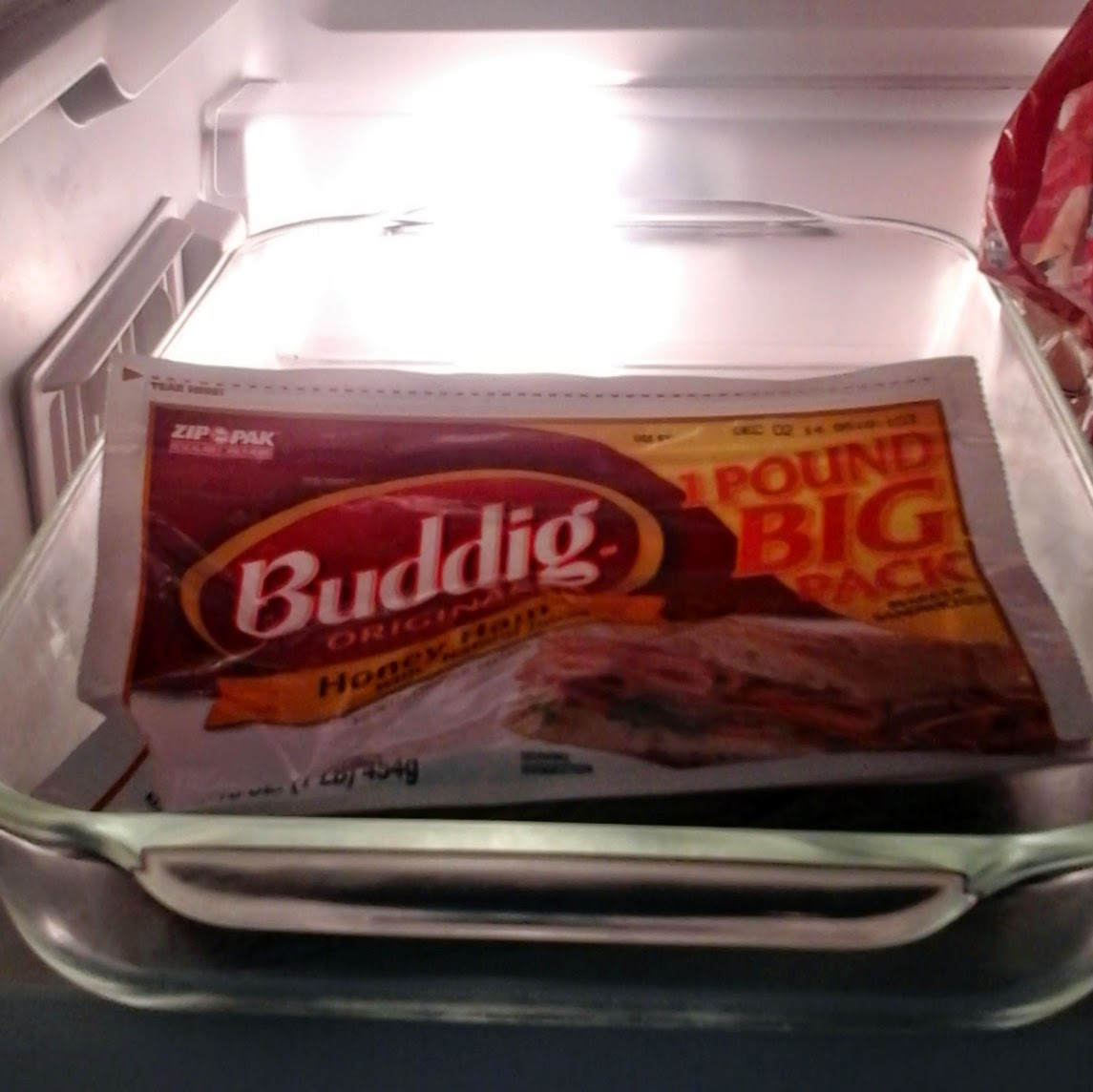 One dedicated Pyrex dish later, if something drips or dribbles, I can just toss the meat dish in the VERY HOT dishwasher and move on with my day. The corner of my eye twitches a little less these days.

***Baby Toolkit is the quotidian revelations of a couple geek parents somewhere in the cornbelt. We are Amazon affiliates, so if you buy stuff through our links, you're supporting our online endeavors. Thanks for reading. My apologies to any vegetarian readers. Hear our voices at GreatBigTable.com.
Posted by adrienne at Thursday, September 25, 2014 1 comment:

Hairband Carabiner 2.0: A Hack and a Hitch

I've been a Parent Hacks fan since early days. Way back in 2009, when Asha posted about storing hairbands on a carabiner, my only daughter was mostly bald, but already a rabid anti-hair accessory activist. The only efficient place for our hairbands was in the donate box.

A local friend reminded me of this hack. Apparently her daughter had hair in 2009. The hack worked well in holding the bands, but not in sorting them.

Without really long hair, my kids need two bands each for ponytails. Though I have unintentionally left the house wearing one neon green sneaker and one white one, my daughters are a bit more particular about things matching.

I didn't like wrestling the bands around on a scavenger hunt for identical pairs.

So, some of the bands got hitched.

Please excuse the photo quality. These are the fastest pictures I could get, not the best.


For simplicity's sake, I keep the two sizes on separate carabiners. One ring for each kid makes morning prep simpler at home and traveling.

A second ponytail holder can be hooked into a singleton already on the ring. It's pretty easy to reunite recently rediscovered bands.

***Baby Toolkit is the product of a geek marriage in the middle Midwest. We have also produced three children who cannot under any circumstances agree upon the same meal. We have a periodic podcast about board games and the groups they inspire at GreatBigTable.com. Our opinions are our own, are organically grown if you don't count the radiation from space, and are harvested irregularly at odd intervals. We are Amazon affiliates, but aren't sure about the future of that relationship. If you buy stuff through those links, we make a small percentage that we'll squander on domain names or internet connectivity. Thanks!
Posted by adrienne at Saturday, September 20, 2014 No comments: