Up On Blocks: Top Construction Materials for Young Builders 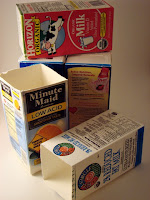 We love blocks. From Jim to the baby, we can lose ourselves in long cycles of construction and destruction.

These simple toys can motivate the baby to army crawl at top speed to topple and me to linger a little longer at the kids' bedtime while we make the ramp just a little bit longer or the tower a little taller. Six-year-old Ranger builds huge marble runs in his bedroom, and three-year-old Scout sneaks into rearrange them while he's at school.

When Uncle Punk is around, we build using all the blocks we can muster. Then we bombard the structures with ping pong balls, bean bags, and old Crossbows and Catapults flying disks.

For the youngest (1 year and under), we prefer cardboard blocks (as she loves knocking towers down on her own head). Our homemade milk/juice carton blocks are a bit too big for her to handle, so she usually plays with Melissa & Doug Alphabet nesting blocks. She isn't much of a stacker yet, but she does like to nest the blocks.

The next step in our ziggurat of block building are old Fisher Price Stack & Build Blocks. These rounded blocks hold together without actually locking. They require less accuracy and motor control to stack and restack independently. Sadly, they're discontinued, so look at resale stores, yard sales, and (in our case) an awesome friend's living room (I promise she gave them to me).

Next in the lineup are MEGA Bloks. When kids' fine motor control and hand strength start improving, big locking blocks exercise their hands and their spatial reasoning. Not that the kids care about that. They're great fun. I chose MEGA over other favorite block brands because I can always find used ones cheap and MEGA seems to have been making exactly the same block for a long time (so there aren't near-fit problems when combining sets). Plus, Ranger's grandma gave him a MEGA Bloks set that he adored.

Around the same time, we get out the Melissa & Doug Unit blocks. These old school stackers are big and dense hunks of wood that are the mainstay of Jones' building. They are bigger than most home block sets. These are 6-year-old Ranger's most played with toy. Scout got a 2 small sets (2- 30 pc sets) for her 3rd birthday (so she would stop sneaking into Ranger's room during the school day to play with his).

Growing up, Uncle Punk and I shared a similar block set (though ours were covered in suspiciously bright, probably toxic, paint). I can remember sitting down on college breaks with my older brother and building elaborate structures (that we later knocked down with balls). If our geek genes prevail, the kids may get decades of play out of these.

A new block type we like are Keva planks. These unassuming identical planks require more planning than the unit blocks, but they introduce more strategy to block construction. Instead of simply grabbing the double long block to span a threshold, now we have plan ahead. There are often many solutions to each challenge, and it's easy to learn that some solutions are much more stable than others. As the kids get bigger, I think these (and their photo book of suggested structures) will become a centerpiece in our living room.

Research reveals that kids are more likely to read in homes where parents read. It is probably some combination of parental modeling and opportunity (more books around and natural pauses in the schedule to read). With blocks as a regular activity, we're seeing some of the same results. Scout, who has grown up watching us build with Ranger, uses blocks in ways that are surprising for her age (like improvising recognizable structures).

Even if blocks don't develop spatial thinking, they're still lots of fun to stack (and knock down).

***Baby Toolkit is the unbridled geekery of Jim & Adrienne Jones- Midwestern parents of three. We have no affiliation with any of the block makers listed above. We are Amazon affiliates, so we get a small percentage of purchases made through our Amazon links.
Posted by adrienne at Wednesday, December 07, 2011 1 comment: