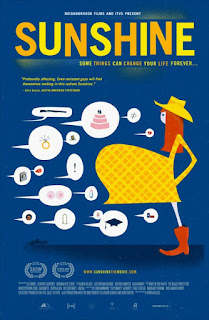 
Watch the show next Tuesday and let us know what you think.
***Baby Toolkit is the hobby blog of geek parents who would otherwise squander their time watching television and boring their family, friends, neighbors, and coworkers with all its incredible content.  Instead we now pester you with it.  DICLOSURE: PBS' Independent Lens sent us a preview disc so we could watch Sunshine in advance (rather than saying "hey, did you catch that great show in May?" sometime around August).  Being on Independent Lens' advance viewer list makes us very happy, but probably has minimal cash value.  We received a burned DVD and a brochure (total value: $3 with a huge side of happiness).  We are also Amazon affiliates, so if you buy through our links (thank you!) a portion of your purchase goes to power the syndicate that is Baby Toolkit.
Posted by adrienne at Thursday, April 29, 2010 2 comments:

Hey, you guys! Baby Toolkit is no longer grounded

I should explain our recent radio silence.  For months, I have owed a car seat and stroller review to our friends at ZRecs.  In March, I decided to ground myself from Baby Toolkit until I handed in my homework.

This weekend I completed the review.  It's mammoth.  It has videos.

In other news, I've been exploring the outside world.  Through happy circumstance I stumbled into a really motivating exercise class.

Friends have visited, games have been played, books have been read, movies have been watched, gadgets have been utilized, problems have been hacked, and lots of food has been eaten.

One nice thing about time in the outside world is that it gives us a lot of inspiration for blogging.

Hang onto your hats, people!  We may start posting with intensity.  Once, maybe even twice a week.


So what have you been up to?
P.S. We also redecorated the blog, so if you feedreader folks want to stop by and tell us how much you miss the old 565 Blogger template, we're happy to hear your thoughts.
***Baby Toolkit is the independent opinion of some slackers who periodically write about geek parenting.
Posted by adrienne at Monday, April 26, 2010 4 comments: