When we moved into this house in 2004, a small, annoying wet spot would appear on our concrete utility room floor during heavy rains. In November, 2006, things changed drastically. Portions of our recently tornado-damaged gutters pulled free of the house under the hydraulic power of 14 inches of rain in one miserable rain storm. Over 50% of our finished, carpeted basement took hundreds of gallons of water. The emergency cleanup guys remarked as we watched the water flow out our garage doors- "at least it's draining well."

They cleaned and dehumidified for more than a week even with much of the water running out the front of the house. We thought our water problems were solved once we got the gutters reinstated, but we were terribly wrong.

The storm had cut a waterway into our basement. With every significant rainfall, we found ourselves vacuuming up gallons of water off the floor (trying to keep it from the carpeted region of the basement). Our house doesn't have a floor drain, so we couldn't hope for the water to clear itself.

Our already broken and improperly tilted patio had taken much of the water during the deluge, and we suspected that its repair might remedy the basement flooding by diverting the water. We hired concrete contractors to put in a new patio. 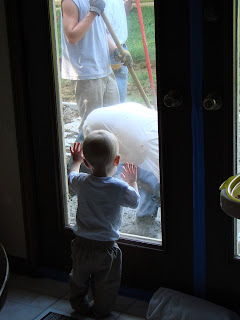 BabyGeek liked to supervise their work through the kitchen doors, and I think most of the guys thought of him as a mascot. They did an excellent job, but the flooding continued.

We got back on the proverbial horse and spent a long week last Fall with the incredibly generous assistance and guidance of family and friends digging trenches and laying irrigation tile to drain water around the house which is situated on a steep hill. We built up high banks adjacent to the house to insure drainage away from the foundation. The flooding continued.

We gave up. I whined, pouted, and cursed the day we bought this house. Paralyzed with frustration, Jim stuck his head in the sand (probably to avoid hearing my whining, pouting, and cursing). We spent rainy days and nights vacuuming up gallons of water with a carpet vac. Our basement retained the horrific flooded carpet (now dry, but pretty suspect), so we simply quit using half of our floorspace. The parties we envisioned and the guests we hoped to host all were sidelined until the flooding could be permanently stopped and we could install new carpeting.

So, what did we do? We turned to the Internet with the keyword search "leaky basement." Our favorite tv contractors, the team at "Ask This Old House," recommended on their web site actually looking at the problem area to assess the problem. One afternoon, Jim and my dad pulled down the drywall nearest the water's point of entry and they found a 7 foot long crack in the poured concrete foundation wall.

It kept raining, and now we could watch the water pour in. This small waterfall had quite the opposite effect of a Zen fountain. It left us desolate and bereft. We could now see how quickly we were losing ground in our war against the water. After losing a lot more sleep and getting really irritated with each other and the house, Jim struck upon a jury-rigged solution to collect some of the water into a bucket. [Using science: capillary action rocks!]

His sponge, board, t-shirt, and yarn solution may not have looked like much, but it now meant we only had to get up every 3-5 hours on stormy nights to vacuum and empty the bucket. We were no longer required to leave someone behind to mind the house on stormy days as long as we came back within 3 hours. It wasn't ideal, but it was progress.

And sometimes, a little progress is all it takes for momentum to build. Jim returned to the "Ask This Old House" web site with the new keywords "foundation crack," and there we learned about the incredible epoxy injection liquid concrete repair, LCR by PolyGem. It sounded perfect.

One Internet order and a few days later, I beat the UPS man to the door to receive this miracle leak stopper.

A few days and a couple phone calls to PolyGem later (they have an amazing and helpful staff), we took BabyGeek to Grandma's and started work.

We started on a Friday evening, and rain was predicted for Saturday afternoon. Our calls to PolyGem revealed that we probably needed less than 24 hours before water made contact with the repair.

We cleared the crack of debris and loose concrete with a steel brush. After a quick vacuuming up, we marked the crack at 1 foot intervals, so we would know where to place the injection ports. We marked these spots with sidewalk chalk. Jim, per the "This Old House" LCR instructions (which were so helpful and complete), gently put a 3 inch finishing nail into the crack at these marked points. These nails helped us line up the ports with the crack when cementing them to the wall. 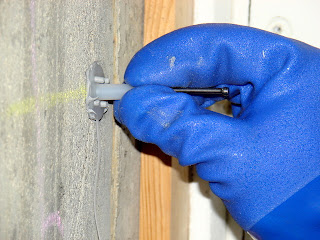 We mixed the two part epoxy cement and attached the injection ports to the wall. After that, we cemented closed the front of the crack and around the ports. Once cement hardened and the ports were secure to the wall, we removed the nails. The cement took about 8 hours to cure (a little longer than it would take in a warmer environment; our basement was on the chilly end of the allowable temperature spectrum). After it cured, we mixed the injection epoxy cartridge, popped it the caulk gun, and filled the ports from the bottom port up. When the port above the one we were filling had epoxy ooze out, we capped the lower port and moved up to the next one. [Note: when moving the caulk gun, release the pressure on the cartridge before changing ports. Otherwise, you will spray a trail of epoxy from one port to the next.]

We bought extra injection epoxy cartridge because we didn't know how much epoxy, if any, would escape out behind the buried foundation wall. In cases were homeowners can access both sides of the wall, it would be advisable to cement the exterior wall before injecting the liquid epoxy. We ended up using all the injection epoxy from the kit and the extra cartridge, so this was money well spent.

On Saturday it rained for 7 hours. We normally would have experienced about a gallon an hour entering our basement with the rate of rainfall. It stayed dry. We're so happy.

We also thought the house would smell strongly of epoxy. The epoxy cement was almost odorless and the liquid epoxy was far more mild than we anticipated. We were able to close off that room for a couple days of curing and there is no residual odor today (4.5 days after application).

This fix won't work for every type of cracking wall, but it's definitely worth investigating if you have a persistent basement leak that won't be stopped by normal measures.
Posted by adrienne at Tuesday, February 27, 2007 3 comments:

Pencil Them In: Commission a Portrait 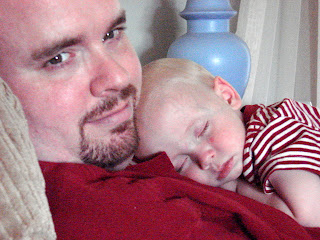 So, I took this great photo of my geek men a few months ago- except it didn't turn out exactly as well as I'd hoped.

The low light caused digital noise that transformed a great family moment into a slightly impressionistic photograph. In an enlargement, the colors are mess and the lamp is ill-placed. Sure, some of this could be cured with Photoshop or Gimp, but with my limited talents it would still look very much photoshopped.

Enter Maggie (friend, mom, and talented artist). She's going to save this sweet image of my geek boys without digital assistance. Maggie draws well. This isn't entirely surprising as she has an art degree, but she has astounding talent.

Here is one of her pencil portraits and the photo it was drawn from: 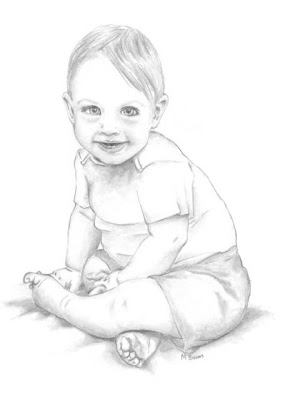 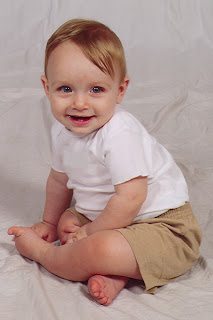 I can't wait to see how the portrait of Jim and BabyGeek comes out! Grandma Luddite commissioned this drawing for my upcoming birthday. This is a cool gift for parents and grandparents- especially those who already have everything.

Maggie works from a studio in her home that she shares with her husband, illustrator and designer Jacob Elijah Walker. She accepts portrait commissions in addition to being an at home caregiver for her son (easily the most athletic child in BabyGeek's playgroup).

Maggie can be contacted through babytoolkit@gmail.com (I don't want her inbox to be attacked by spambots, so I'll forward all initial inquiries to her). For a pencil portrait of one person on 9 by 12 inch paper, it's $65 including US shipping and handling. It's $30 more for each additional person in the portrait. She needs a clear image file of a 4x6 photo at 300 dpi resolution (or larger) to work from.

This is a great way to save a moment that didn't translate well technically into a photography or a way to offer a unique and memorable gift.
Posted by adrienne at Monday, February 19, 2007 2 comments:

Pennies from Heaven: $15 PayPal Rebate on a $30 Purchase 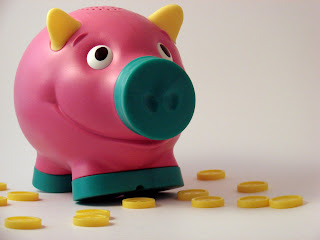 Wow. I stopped by wantnot.net which is a great site that always makes me want to shop (so I try not to visit too often).

It looks like it requires pre-registration of the email account and the payment must be to a business account through an American or Canadian business site that uses PayPal or through the US or Canadian versions of ebay. You must log in to your PayPal account when you make the purchase. (So if you're checking out somewhere that PayPal handles the transactions, use their log me in to my PayPal account button when you hit that option. There's some other small print, and I always recommend reading such stuff before signing up for any free offer (something may be important to you that isn't relevant to me and thus not summarized here). The rebate will be paid into PayPal accounts on May 28, 2007.

Visit http://paypal.promotionexpert.com/greatshopping/signup/index.html for all the small print and to register for the rebate.

Maybe now you can buy the Diaper Valet you've had your eye on! Have you seen our new Elvis Lives Valet? Elvis is everywhere indeed.

Okay, I may have spoken too soon about the Diaper Champ being a hopeless stinking pile of plastic.

I was born with my foot in my mouth, so this is really no big surprise. 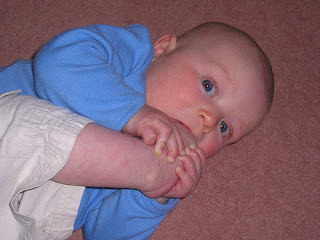 Upon Jasi's suggestion, I called the toll-free Baby Trend helpline today (1(800) 328-7363). A friendly associate took my contact information and they are sending me replacement gaskets.

Maybe this poo pail can be saved. It's a free call and the gaskets (yes, they are sending more than one!) are shipped free of charge, so there's really nothing to lose.

Thank you, Jasi!
And thank you, Baby Trend.

So for now, I'm holding my breath- waiting to see if the new gasket will work.

UPDATE 2/6/07
The gaskets have arrived. They sent 3, but it looks like they're all used at one time. Two of them are all foam, o-shaped, and appear to go alongside the handle and the third is the large foam one that sits around the stink hole.

I'll post pictures of our gasket swap-out, but for now the Champ is taking a bleach bath as recommended in the gasket instructions: "Step #3- This is a good time to wash the Diaper Champ with hot soapy water with a little bleach added for disinfection."