Pedicures for the Churlish: Video-Gaming the Resistance 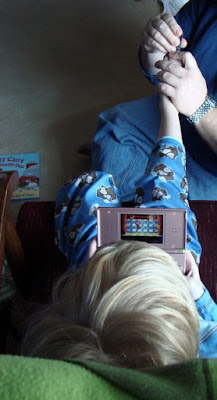 Ranger is no fan of nail trimming.

After a few episodes of wailing and flailing, Jim and I became clipper-shy. In an epic battle of parental buck-passing, we each denied knowledge of his long, uneven nails until the situation demanded immediate action (with luck, by the other parent).

In the living room, I unearthed our Nintendo DS Lite: it's one of those rare secrets we've managed to keep from the curious kid. With Kirby Super Star Ultra on board, I handed the kid "the toenail game."

Instant tranquility via electronic rapture. After his toenails were finished, Ranger offered his hands to buy more time with the flashing pixels.

In order to keep the entertainment special, we allow no non-persuasive access to the DS.

When we will stop exploiting the boy's love for video games? Whenever it stops working so well.

I have the same problem with our 75-pound dog. Going out to buy a DS...

My dad has an old saw (usually applied to rock concerts) about how they use flashing lights and loud noises to train elephants.

I wonder where they find controllers that large.

I'm planning to throw a fit next time Francie clips my nails in hopes of getting a DS...

We recently got a few games for our 3 y/o to play while on long trips. We have made it clear that she only gets to use it in certain situations and it seems to work out very well!

What other games do you let Ranger play? I'm always looking for something good to pick up.

The other game we've road tested with Ranger is Mario Kart DS.

We've talked about adding Super Monkey Ball next, but we're not sure how much dexterity is required.

Ranger spent about 30 minutes in a waiting room today playing with the built-in Pictochat feature. He really enjoyed drawing on the screen and then seeing it appear on the upper screen. That makes me think that Crayola's Treasure Adventures" could be a hit, but I haven't had a chance to try it.

I Spy: Carnival almost made it into my shopping basket the last time I saw it. But that might be for me as much as Ranger. I've been lusting after MillionHeir for weeks.

I'll have to drag out the DS Lite! I had pretty much declared it useless after I got tired of BrainAge and turned it into a fairly sucky ebook reader/MP3 player with some homebrew software and a media dock. But... my boy has grown up a lot since then, and it would be just the right size to take around to doctors' appointments and such. Thanks!

This is a FANTASTIC idea. My 3 year old daughter is fine with getting her fingernails cut, but loses it when it comes to her toenails. She begs me not to cut them and often tells me that her "little toes" are crying.

Anyway, I think a good dose of distraction from a novel source is brilliant. (Parent Hacks should have linked this if they haven't already)