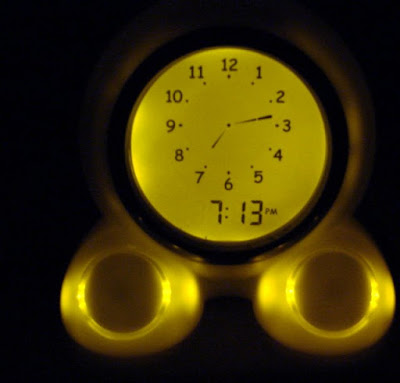 Since my shortly after midnight arrival in the world, my dad has called me a night owl. My proclivity for preferring dusk over dawn always frustrated my morning lark parents.

And now I understand. Ranger, like Jim, can be an early riser. When he was in a crib, I would hear an insistent "MOM, I'M UP!" far before I could shake the haze out of my gourd and find my way into the emerging light.

When Thingamababy reviewed a wake-up clock, it caught my imagination, however the clock he reviewed lacked numbers. Ranger loved numbers and analog clocks/watches, so it seemed a shame to choose a picture clock which removed them.

($40). On top of having a learning game, audio alarm, and talking time feature, the clock can change colors to indicate waking time.

We put the clock in Ranger's room before his third birthday, so I didn't know what to expect (the recommended ages are 3 and up). As a compromise, I set the alarm for a time that was later than Ranger's rosy fingers of dawn, but earlier than my mid-morning sloth-like crawl from bed. Jim explained that he could call out as soon as the clock turned green in the morning.

The next morning he called out at a reasonable hour ("MOM, it's greeeeen!"). Even the morning's bright glow couldn't dampen my enthusiasm. 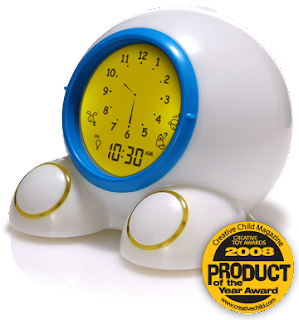 In subsequent months, by pressing the clock's talking time toe, Ranger has learned to identify the hour indicated on a clock face. He's still working on minutes, but he loves checking the time. I suspect he'll make the leap in the next year especially if we turn on the learning game. This cute gadget teaches gradually in progressive increments: hours, half hours, quarter hours, and 10 minute intervals.

The control panel is a bit intimidating, but a well-written manual clarifies everything.

If you are looking for something with fewer bells and whistles, American Innovative will soon release an Okay to Wake clock with color alarms and a Tick Talk! clock that allows you or your child to record their own wake messages ($30 each).

We received a sample Teach Me Time! clock ($40 value) from American Innovative after our request. Baby Toolkit has no affiliation with or financial interest in American Innovative. We are not professional chronographers; we're just geek parents with strong opinions (and a little extra sleep each morning).  Disclosure: We are Amazon affiliates and a small portion of purchases made through our Amazon links helps support Baby Toolkit's operating costs (thank you!).
Posted by adrienne at Thursday, April 23, 2009

I know what I'm buying for Ben at the earliest possible opportunity :).

The fact that I'm still working right now should tell you how thrilled I will be when he shows up and says, "MomMom why are you still sweeps? I'm awake" at around 8am. And, of course, P will sleep through that.

I've been looking at and wondering if this clock would work for us, but I've also learned from experience that a yellow night light keeps our twins awake. I've looked at the documentation but can't figure out if you can disable the yellow nightlight, but still use the green "okay to wake" function or if they work in conjunction only.

adjunctmom: Ranger liked to wake at 6:30 am before, now it's 8 am on days without preschool.

anonymous: We opted not to use the yellow nightlight at all. The top photo is of our clock with just the LCD backlight. On the older clocks (like mine) there was no adjustment of this backlight. The models now sold have options to turn the backlight down or off. We prefer dark rooms, so we are considering replacing ours with a 2009 model.

Oh, if only I had this problem. Squirrelboy would rather stay up till 11 PM and get up at 10. But Faerygirl gets up at 6 AM. And I prefer an early rise. Is there a clock that works the OTHER way? One that makes the kids get sleepy earlier?

Very, very cool! I love that you have gotten help with Ranger's early-morning wake-up calls from this!

Our household's internal clocks have been changing their rhythyms this year it seems. I used to be delighted that my kiddos were better than their Daddy or I at getting up in the morning for school. But this year has everybody a bit more tired -- perhaps the increased amount of homework keeping the children from getting to bed on time, so I have to drag myself *and* hubby *and* 3rd-grader *and* kindergartener up. I don't enjoy this responsibility, as I would like to hide under the covers, just like the rest of them! But thankfully, I've gotten a little bit better (I think) at going to bed at night. I could stay up to 2 am with the best of them, but I'm starting to notice more readily that getting into bed by 10 pm is a reasonable goal! And *when* I make it, I feel soooo very proud of myself!

:) Hope you get some much-deserved rest this weekend, friend!
~Francie

But, once we got this clock, she has not once come out of her room before 7am. We'll hear her playing in her room by herself up until that point, then the second the clock turns green she runs down the hall saying "It's time to wake up! The clock is green!". This has been going on for about 3 weeks straight, and we have two much happier parents as a result.

The teach-time game is still a bit early for her, but she seems to be understanding more about clocks and time thanks to the "push to hear the current time" button feature.

We've already recommended to lots of friends with young kids. Maybe it won't work for everyone, but we think it's great.

We recently bought one of these clocks for our early rising 3.5-year-old, and love it! It's been great to sleep in on weekends again.

The model we received from Amazon allows us to dim the backlight, but not turn it off. For us, the lighted "feet" still seemed quite annoyingly bright. Luckily, an Amazon reviewer pointed out that these 4 tiny LEDs can be covered with electrical tape-- saved! You'll need a regular phillips-head to take out the four screws in the clock body, and a very tiny one meant for electronics in order to unscrew the two foot circuit boards, but it's pretty easy to do.