Funtainer and Foogo: The Next Generation of Straw Cups 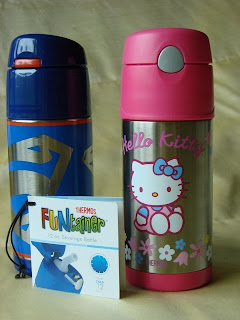 UPDATE, 2-17-09: We no longer recommend the new version of the FUNtainer straw bottle (shown here as Hello Kitty). Please read our detailed concerns about the NEW version straw bottle.

A little over a year ago, we compared our beloved FUNtainer straw cups with Thermos' Foogo straw cups.

While the FUNtainer and Foogo look much the same and both function well in daily use, their inner assemblies were really different. In the spring a new generation of FUNtainers started appearing on the shelves. These new FUNtainers can be easily identified by their oval push-buttons.

We picked up a new Hello Kitty model at Target for around $15. All the Target offerings were licensed characters (Dark Knight Batman, Pirates of the Caribbean, Speed Racer, and Barbie). We're not that into licensed characters here, so we chose one we could give to our niece who needs (straw cups for school) after testing.

It turns out that these new FUNtainers innards are more like the Foogo on the inside. The old short straw on top of the lid has been replaced by a through-the-lid straw assembly that I absolutely love. The two new silicone pieces are so much harder to lose in the dishwasher. There's also no chance of top straw removal by a very persistent young infant or toddler (unless they manage to take off the entire screw-on lid which would be quite a feat). 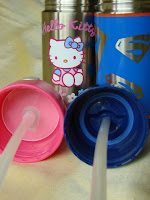 The new version has a silicone disk with an integrated straw that pushes up through the screw-on lid. The lower straw attaches to the silicone disk rather than the plastic screw on lid. Left images show the straw assemblies on the old (blue) FUNtainer versus the new (pink) one. Right image shows the assembled FUNtainers from below. One of the best aspects of the new assembly is not having to clean the very small opening where the straws attach to the screw-on lid.

I really like this new FUNtainer design, but the plastic seems to have changed. We didn't have any problems with breakage on our old FUNtainer lids at all despite over a year's worth of regular (rough) toddler use, but the Hello Kitty lid was already cracked (though I didn't notice) when I took these comparison pictures.

After pre-washing the Hello Kitty FUNtainer, I filled it and heard a sharp snap when screwing on the lid. The new lid seemed to close normally even though hinges was visibly cracked. Unfortunately any sideways pressure on the lid now allows it to pop open. So, I called Thermos (1-800-831-9242) and they're sending us a replacement lid. Others have reported similar problems with cracking FUNtainer lids in 2008, so I'm not sure the new screw-top lids are as strong as their predecessors. With Thermos' prompt customer service response, I suspect that they will soon remedy this if it is a manufacturing defect or shipping introduced problem. If you want to avoid the potential lid hassle though, the Foogo appears to have no changes in the plastic screw-top lid. 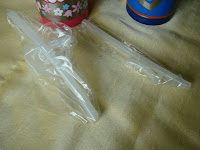 Like the first generation Funtainers, the new versions come with a bagged replacement upper and lower straw assembly tucked inside. Additional replacement straws can also be purchased for a nominal fee through Thermos' toll free number. 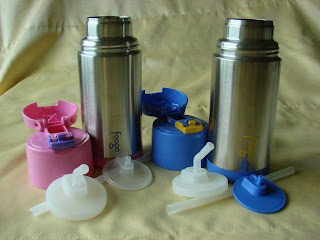 The only change I can find in the Foogo since its introduction in 2007 is cosmetic. As far as I can see, the current Foogo (pink) is identical to the original version (blue) except the plastic disk inside the upper straw assembly is now clear rather than the color of the screw-on lid. This makes the disk slightly harder to find in soap suds. The Foogo's lid remains a 4 part straw assembly (upper straw, inner disk, lower straw, & screw top) opposed to the 3 part assembly of the FUNtainer (upper/lower straws, & screw top). For dishwashing simplicity I prefer the new FUNtainer straw cups.

The lower straws of the FUNtainers and the Foogo seem to be identical- which simplifies assembly when you own a variety.

It doesn't look like many of the new style FUNtainer straw cups are available online at this point. Amazon presently shows no lids with oval buttons nor does Thermos' own site. Friends have reported seeing the new styles in big box retailers like Target, but their online stores aren't showing any offerings. Keep watching though, I suspect the next generation will soon be widely available online as old stock sells out.

All in all, when the lid issues get straightened out, this new Funtainer promises to be a great retooling of an old favorite.

We have the original Foogo straw bottles. Our son is 9 months old, so he doesn't drink from these yet. I bought them for breast milk storage. I remove the straw for now and I can bring a decent amount of milk on trips and be sure it will stay safely cold until needed. These also fit well in a smaller cooler. Mommies looking for a safe storage solution for trips or out for a day, these are great. We also love the Foogo sippy (so much that I got him 2 pink/purple ones since the manufacturer is out of the blue version.) We also love the Foogo food containers since I make his baby food myself. We have 2 that are in constant rotation. We I can melt a couple cubes of food and carry them to feed him while we are out and they stay warm and healthy.

I appreciate your review of the funtainers- especially the cracking of the lids. Good to know we got the better product.

We just received a replacement lid for the Hello Kitty FUNtainer.

I opted for a black lid as the pink ones were on back order when I called. The black one appears to be made of a similar plastic to the first generation FUNtainers. It makes our Hello Kitty hardcore.

Unfortunately here in Canada they are still selling the old kind!

Thank you so much for these reviews! I am looking for new straw cups for the upcoming school year and my two girls keep confusing their pink Foogos (heaven forbid one of them use a blue one. Sigh) The Funtainer designs seem a perfect solution but I was wondering about the straw differences. Good to see they have changed it up. Thank you for this review and the pictures too. VERY helpful for an overworked mom like myself.

Upon your review, I got my little one a Funtainer to take on trips. After using it at an all day festival, and having it keep ice cool ALL DAY, I went back and bought another one!

Target is now selling "camo print" funtainers in purple, pink, navy, and black. We have a purple one, and a Batman one. If you think Hello Kitty looks hardcore with a black lid, you should see how The Dark Knight looks with a purple lid! ;)

Needless to say, these are great. I love our. And I never would have known without your review!

We have the Dark Knight version and my 5 year old came home today all bummed out that the cap had broken. I e-mailed thermos and I hope they will send a replacement. I'll let you know how we make out.

Is there a reason why the Foogoo is rated 18m+? My baby is 12m and has been drinking out of a Nuby flip 'n sip straw cup since 6m. The Nuby is rated 6m+ but the Foogoo and all other straw sippies are rated 18m+. Is it okay for a baby younger than 18m to use the straw cups? I'm confused.

Also I'm glad to read the review on the new funtainers. We just got back from Target with a Foogoo. Our child was using a born free drinking cup but the hard spout leaks!

Thermos just came out a NEW Foogo, which look like the new Funtainer with the oval push button. I prefer the square push botton on the Foogo. The downside of the square botton Foogo, is the straw is so soft, my daughter keep bite on them. I had them replaced several times already. I tested out the Funtainer with the stronger straw but it started to leak. If I tight the cap too tight, the inside pear shape thingy will turn and leave a small opening and if the bottle lean on it side, for sure it leak. I end up returning it.

Hope Thermos come out with the older model of Foogo with square botton but stronger straw & include some extra straws!!! My gosh, paying $15 for each bottle, at least they could do is give 1 extra straw.

I have bought 3 funtainers and all three have broken lids. I loved the stainless steel carafe and the fact that it was insulated so the drink stays cold, but they are pretty much useless without a lid. I have a 4 and 18 month old and it didn't take long for them to drop them on the floor and that's all it took to crack the lids. I also called Thermos to order replacement lids, but I was not happy about doing so. They should stand behind their products and offer replacement parts at no charge as there is clearly a manufacturing defect. I paid $13.00 a thermos in Walmart, and now have to pay $9.50 to get the new lids.

DO NOT BUY THIS PRODUCT!!! I bought eight Funtainers for my two kids. One drop and the lid is broken! I now have four broken lids rendering the containers useless, and it's just a matter of time before the rest break. I emailed Thermos and they want $2.00 each + shipping and handling to replace them. Why would I pay money for a product that is going to break again? They should either replace it for free with a cap that will not break, or give me a full refund for the defective product. No one should pay for their design flaw; it makes no sense. DO NOT BUY THIS PRODUCT.

I have a funtainer drink bottle and my daughter accidentally dropped it once and the lid cracked the second time she dropped it it broke off completely... I live in Australia and it is virtually impossible to get a replacement! They need to do something about their lid designs as they are very breakable!

I also just called about a replacement lid and was NOT HAPPY with the $2.00 plus a minimum of $3 shipping. $5 for a replacement lid when the thermos costs $12 is rediculous! My daughter will just have to drink with no flip-top lid. I will not pay that much for a product that breaks!

So glad to find info on this problem. I bought the Funtainer version for my 2 kids (ages 10 and 7). The lids of both are now cracked. Thanks to this post, I called Thermos. I was given a bit of run-around... the rep said it was caused by dropping it. DUH. They're made for kids... kids drop things. But persistence paid off. She's sending me 2 new ones in the mail - no charge. With the caveat that any more replacements will be charged $2+shipping. Doubt I'll buy these again, unless they improve their durability.