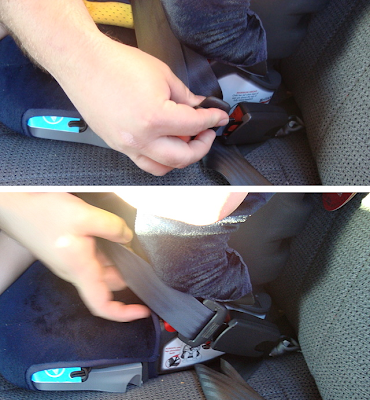 Ranger outgrew his convertible car seat pretty quickly. Though we prefer 5 point harnesses for him during the toddler years, we bought a Britax booster seat for Jim's car. Ranger tends to ride in my car most of the time, and Jim needs a car seat that can fit in the trunk during carpool weeks.

We've been frustrated on a couple occasions to find Ranger releasing the seat belt while in transit. Toddlers simply don't seem equipped for the responsibility of booster seats.

Jim discovered that with our car and our seat (this may not be true for all car and booster combinations) that twisting the seat belt receptacle, he can prevent Ranger from reaching the release button. If you choose to attempt this, please inspect your seat and belt configuration to be sure that pressure won't inadvertently be placed on the release button when the seat belt is tightened.

Jim flips the belt receiver before buckling in Ranger and pulling the belt taut. It actually works well enough in our car that the other adults in the family take a little longer to get to the release button. Meanwhile, Ranger likes to direct the activity, "Press the button, Grandma!"
Posted by adrienne at Tuesday, July 01, 2008

Check out Z Recs' related hack on tightening a too long center seatbelt.

We just took the 5 pt harness off our Evenflo Generations booster seat. I was stunned when I was pumping gas and my daughter undid her seatbelt and climbed through to my door to get out.

Now I tell her when we are at our destination that she can reach over and unbuckle.

I HATE the newfound freedom that she has. Even the fact that she can get her shoulder out and reach pretty far.