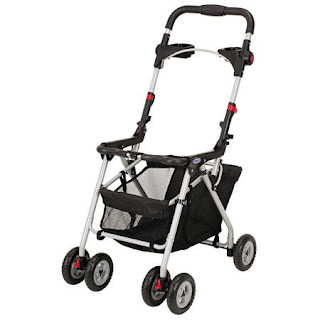 When we started stroller shopping, it seemed that all the registries were strongly encouraging travel systems for new parents. In my limited stroller-pushing experience with travel systems they seemed heavy, unwieldy, and less than compact when folded.

When it became apparent that Ranger would enter the world via cesarean, the weight of a bulky travel system (20+ pounds) seemed out of the question in the first month when I would be on lifting restriction. The "compact" travel systems didn't seem that much smaller or lighter (~17 pounds).

We had decided that we wanted a specific top-rated infant car seat, so we sought a compatible stroller, but they were all so heavy.

Then I started reading about stroller frames that carry car seat strollers. At the time, the Baby Trend Snap N Go frame stroller

(~$50) was the only option available locally. It weighed around 12 pounds, but it was reported to be a little complex to work with the Graco car seat we had chosen. We registered for it with reservations.

(~$60) came on the market. It was much easier to use with our chosen car seat than the universal frame strollers. We changed our registry immediately.

The SnugRider is incredibly light and still very stable. It's adjustable push bar works for people with a wide variety of heights. The basket is HUGE and easily accessed unless you stuff one enormous object in there. The stroller folds up to a moderate size, and with the adjustable push bar lowered, it works well as a carrier holder in restaurants.

We think this frame would be great for maneuvering airports with an infant, although it would have to be gate checked upon arriving at the plane (there's no way it would pass for carry-on).

It doesn't have a an additional sunshade like the ones on travel systems, so we often took along a light blanket to cover the carrier in bright light or wind.

A Graco car seat is very easy to install and remove from the frame. Snapping the seat in and out of the stroller are as simple as using the locking base in the car (maybe even easier).

The SnugRider was a vast improvement upon using the car seat as a solo carrier (which wears out already tired arms and shoulders). 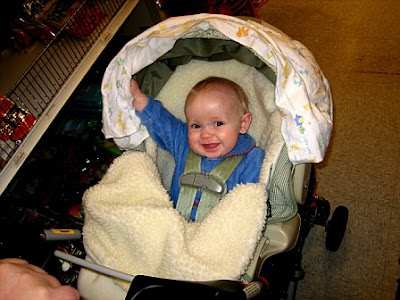 We tricked out his car seat for winter with a sherpa Bundle Me cover by J.J. Cole

(incidentally one of the few car seat covers that work well with the Graco seat) that a friend didn't want and a flannel receiving blanket attached to the shade with a few big safety pins (on the outside so Ranger couldn't tinker with them). We just flipped the blanket back over the seat's shade when Ranger was out of the elements and awake.

Ranger really liked riding in the SnugRider as it let him face whoever was pushing and he could encourage us to make faces or do little dances to keep him entertained.

We were all a little sad when he got too tall for his infant car seat and had to move to an actual stroller (the Maclaren Vogue- our review).

*This review is the independent, unsolictied opinion of Baby Toolkit (babytoolkit.blogspot.com). We have no relationship with and have received no compensation from Graco Baby (beyond being satisfied customers).
Posted by adrienne at Tuesday, July 10, 2007