Marshmallow Magic: Mix It Up With Some Novel Treats 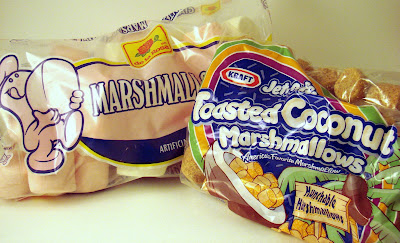 Target's after-Easter clearance (at 75% off yesterday) helped me score supplies for a favorite household hack. We got oodles of Toasted Coconut Marshmallows at $0.24 a bag.

While the bag claims they are "munchable" alone, I couldn't wait to get them home and try them as Marshmallow Crispy Treats.

For a young pink-loving friend's birthday party last summer, I threw together a batch of Rice Krispie Treats made with the Tutti-Frutti flavored Pink and White marshmallows by de la Rosa. I shaped them in a heart-shaped jello mold (no, I don't normally mold gelatin, I used to do a froofy desert as a lesson in my technology and the family class to make people understand how a jiggly desert once inferred electric refrigeration and affluence as opposed to what it denotes these days). The tan color of the crispies aren't well-masked by the pale pink of the melted mallows, so the whole think looked more like a human heart in color. Jim encouraged me to take the fleshy looking treats anyway (probably to get them out of the house).

We really can't say how those kids liked them because the adults (none of us huge fans of Rice Krispie treats) couldn't stay away from them. I made a second batch of these pink monstrosities for a dinner with my brother (a former fan of krispie treats suffering from complete burnout after a few too many bachelor meals of them). My brother, being super suspicious of many unfamiliar foods and imaginatively squeamish about anything mildly suggesting cannibalism, was entirely put off by their color.

But, he is a brave soul and wouldn't want to hurt my feelings, so he nibbled at one. This is truly an act of bravery as Mom and I once made him a homemade Key Lime pie for his birthday- substituting regular Persian limes for Key Limes (completely disregarding their size difference and using a 1:1 substitution). We included the zest of 12 Persian limes in one pie. My brother ate a very generous piece without a word (though I suspect his head was threatening to implode with the tartness). I tried the pie after he left and gagged. I can eat raw lemons, and the pervasive tartness of this desert was way too much for me. He has ample grounds not to trust me.

After a little nibbling, he took a bite. "Wow, these are great!" After finishing a few he asked "Could I take the leftovers home?" I made sure there were plenty left as he was gracious enough to eat an entire of slice of that horrible pie and pretend to enjoy it. He really is a fine big brother.

So, the Tutti-Frutti ugly treats passed muster with a cynical audience- and actually a few adults from the kids' party kept asking me for the recipe. I was happy to tell them about the substitution, but I don't know if we can get the de la Rosa marshmallows locally, I typically buy them at Saraga when we visit Indianapolis.

When we came upon the Toasted Coconut Marshmallows at 75% off, I knew we would have to try another variation. The bags release a cloud of toasted coconut aroma, so be prepared to spend maybe $0.96 if you find them at your local Target. Unlike the typical fat-free marshmallow crispy treats, the coconut marshmallows pack some saturated fat, so they promised to be extra delicious.

I made a test batch, promising Jim he could take them to work if they were good. And they were. Maybe not as good as the de la Rosas, but lusciously scented with coconut sophistication they exceeded the regular limits of standard issue crispy treats. I was so sad to enter the kitchen on Friday morning and find that Jim had taken ALL of them to work. Leaving none behind for young Ranger (BabyGeek has outgrown the old moniker) or me. When I called him at work to see if he would bring leftovers home, he reported that they were all promptly consumed by his fellow Morlocks.

I was forced to make another pan. Ranger saw me eating one and demanded a portion. He's onto the fact that much of what I don't offer to him is delicious (this actually proves useful in getting him to try new things through reverse psychology), and in this case I was willing to share.

Try them at your house. And if your kids don't like coconut, well I guess you may have to invite a few other grownups over for Happy Hour. (Jet-Puffed also makes Strawberry Marshmallows- though I've never seen them in stores- in case you want to placate the wee ones with treacle.)
Posted by adrienne at Saturday, April 14, 2007

I think this is one of the funniest posts ever. Why do adults act like crack addicts when grouped together and faced with kiddie treats - someone should get a grant for that study.

My friend just moved to Indy and I love Saraga. They have everything - and cheap sushi-grade tuna and salmon. I'm passing this post on.

We tested the Coconut Marshmallows for "munchability" and do not advise that others try it. Rarf.