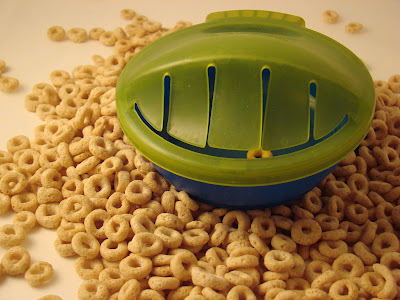 I've spent much of Ranger's solid food eating career seeking the panacea of a truly spill-proof snack cup. Wouldn't it be wonderful for the little guy to serve up his own snacks in the backseat or the stroller? It's a beautiful dream, but only a dream. 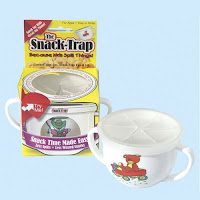 (~$6 at Babies R Us). Like most of the self-serve snack cups, it has no airtight option. When the snacks remain in the cup for any measure of time they are exposed to air which can cause them to dry out if your child doesn't eat like a starved Wolverine or is choosing to reject your current snack offering. While this is annoying, air exposure surely doesn't represent a death knell for the cup if you're not storing long-term provisions in them (and who would do that?). It does however mean that you can't toss the cup into a backpack unless you want lint in your Cheerios and Cheerio dust everywhere else. Snack Trap offers "Snap-Over Lids" to solve this problem (~$2 NOT including shipping and not sold in most retail stores). That brings you cup cost to over $8. They also offer a "Stay Fresh" airtight lid that replaces the normal slotted lid for $1.50 (plus shipping) but doesn't dispense snacks. Although additional lids are more likely to end up in "storage" under our car seats and sofa, I had Ranger try the Snack Trap. The trap worked well for its first 10 minutes, but after more toddler testing, we found that it's flaps- made of mere Earthly materials- were not immune to bending. Ranger found the slightly altered cup very handy in relasing a wide school of Goldfish Crackers throughout the back of the car. The Snack Trap was promptly retired.

Next up was the Gerber Lil' Snackin' Bowl (I guess there is a short supply of letters at Gerber these days and an overabundance of punctuation) for $5 for a 2 bowl set. While there is Gerber feeding equipment we love, the Lil' Snackin' Bowl failed miserably at snack retention and rapidly became more annoying than it's predecessor. The bowl had the same always-open flaw like the basic Snack Trap, but it had no obvious remedies beyond a Ziplock baggie. Within milliseconds of Ranger receiving the loaded Lil' Snackin' he found the bowl's sweet spot above the the center retaining "tooth" (see top photo) and released its payload everywhere. By flicking his wrist while pressing the bowl open, he could shower his environs with ample snackage: just call him "Johnny Cheerioseed." Two down, one to go.

Our next challenger was the First Year's Take & Toss Perfect Portion Snack Saver (6 cups, 4 portion lids, and 2 storage lids for around $3.50). The packaging claims to allow different portion sizes according to the parent's wishes. Forget it, if your kid is awake, they will choose their own portion size- and it's wide open. This rigid lid seems more effective at containing snacks than the others, but probably because it provides less entertainment value by merely dumping its payload rather than launching it into the stratosphere. The portion lids are not airtight, nor do they lock in any position (including the closed position).

Apparently, a good snack holder is hard to find (possibly impossible). Save your money and accept a certain amount of escapee snack foods around the car, house, and planet. It's really okay, they'll know us by our trail of Cheerios.

Edit: We've since found a snack cup that works for the most part and, with three little kids, we don't leave home without them. Check out our review of a cup that actually works.

Too bad, I was so hoping for one that worked! Maybe someone will come up with a homemade model... Well, thanks for doing the testing for us all!

Come on guys, we should be able to figure out something, right? We could then quit our day jobs...

Good points! I'll talk to my local mechanical engineer about an innovative solution (hack and/or manufactured). I'll post an update if he has interesting conclusions.

Anyone with a good product or links to a hack please post their favorite solution here to save us poor souls drowning in the Goldfishes.

I must confess to that I've considered (and dismissed) resorting to a biscuit ball for dogs (http://tinyurl.com/2b53k3) because they don't dispense that much at a time.

HOWEVER (1) people would report me to the authorities for feeding my child dog food- thanks to the dog biscuit- shaped cut outs, (2) who knows what plastics they use in that thing, and (3) dogs would definitely be justified in absconding with it which might give children some phobia of canines.

I like the snack trap. But I generally only use it for when my daughter is in the stroller or shopping cart. That way, any Cheerios that she flings aren't in my car. And I do put the whole thing into a ziploc when storing it in the diaper bag.

Thanks for researching this. My daughter just started on Cheerios and the like and I was thinking about getting one of the snack holders for her.

We're glad to post about this. When I took the Gerber Lil' Snackers to playgroup to see if anyone else wanted to try them, it turned out most of us had bought and despised them. That's a lot of money wasted when we could have just passed around one set.

I actually was in your shoes, my little man quickly discovered how to turn the snack trap prongs inward and dump the contents so we retired them.

Then we pulled them back out when he was about 2.5 and at 3 we use them regularly again, sometimes with the top, sometimes without as just snack cups.

Tossed into a ziplock it's not so bad in the diaper bag, and I feel better about him snacking from a solid cup than from a plastic baggie (choking hazard).

Never fear, your investment WILL get some use, just give it time and reintroduce them! :)

We just got the Munchkin Snack Catchers as a gift and my 2 yr. 4 mo. twins haven't figured out how to dump 'em out yet. Moms at playgroup seemed to think they worked better than the Snack Traps. I refill them 2x a day, so they don't usually get a chance to dry out, though I like the idea of putting the whole think in a baggie.

Have you tried the Munchie Mug?
http://www.munchiemug.com/

Yes, upon a friend's recommendation, we checked them out:

We now own two and rarely leave home without one.

Munchie Mug is the BEST. We just lost ours and are leaving on a trip tomorrow. Since they are only sold online, we will be without one for a week! It's gonna be one tough week....a