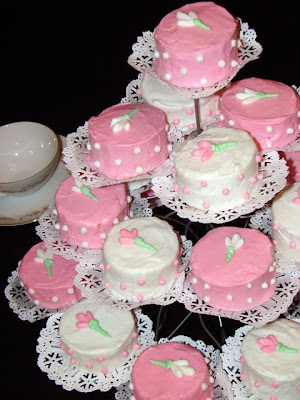 A couple months ago I attended a reasonably impromptu, very wonderful, very informal frozen food baby shower for some of pregnant friends. As the entire baby group was in attendance (babies and toddlers included), we didn't bother with niceties like decorations, food for guests, games, or much else. It was a bustling, splendid time.

I realized, after writing about the shower, that my dear friend, due only 7 weeks later, had no festivities planned to celebrate the arrival of her third child. This seemed a grave omission on my part, especially as she co-hosted a shower for BabyGeek's arrival.

Thus, I became an ersatz hostess. While many of the girls I knew growing up were encouraged to participate in and understand formal hostessing, I was raised by a grown tomboy with no interest in such matters. Travel, basketball, or sailing? My mom rules. But if it requires a doily but not Elmer's school glue- forget about it.

If I can get through a formal social event without any major gaffs, I count myself lucky. Hosting one presented a challenge.

So I threw a tea. Why, a tea? It's the only formal event I usually feel much at ease attending- probably because it's primarily centered around eating things that are very bad for me and talking. My friend is also a tea aficionado. Plus, I've been to loads of teas of all kinds. It seems hard to screw up: sweet and savory foods full of cholesterol, some good tea, a decent location, and presto, a party with grace and simplicity.

What do I put on the invitations?
Although a food shower is a common idea in some parts of the country, it isn't even a known quantity here. I struggled and Googled to write an invitation. The one I had attended had been organized by email, so there really wasn't any written invitation available to crib. Google only offered a few rhymes, but they weren't my style or the expectant mom's.

So, this is what I eventually wrote:
You are cordially invited to a food shower and tea in honor of [mom] and her newest daughter at [time, location, details]. Please join us for conversation and celebration. [hostess, rsvp, contact info]

And, I knew everyone receiving the invite would be confused, so I slipped in a second magic decoder explanation on the map with directions to the event:

What is a food shower?

Like a baby shower, a food shower celebrates friendship and the arrival of new life.

Unlike a traditional baby shower, the gifts are ready-to-freeze or frozen foods that the family can enjoy in those harried first weeks after the baby's arrival. It is always appreciated when givers include a copy of the recipe for the family.

It is also greatly appreciated by the family if the food is packaged in containers that need not be returned.

Please clearly label any dishes containing nuts or nut products as *** has a severe nut allergy.


Quite a few people attending the shower mentioned that they appreciated the explanation. While I was writing the invites, others said suggesting restaurant gift cards or offering to bring fresh meals after the baby's home would be appropriate in the food shower explanation, but I figured, better safe than sorry. As I understand a shower, it is a gathering to celebrate the arrival of a child, gifts (although traditional) are not requisite. So, the suggestion of bringing anything at all, much less what to bring, seemed to teeter on the cusp of graceless. As I have little judgment in such things, I decided in favor of brevity.

I printed the invites and envelopes using a spreadsheet and mail merge. When I was shopping for invites, I chose a card that could double as a thank you note card. I printed a second set of the guest envelopes with the honoree's name and return address in place of my own. It was really easy to do. Sure, not everyone invited attended, but I had plenty of stationary and some of those people not in attendance may still give a gift. The honoree mom was quite excited to receive these and sent out thank you notes lightning fast (which is impressive as the baby was born less than a week after the shower).

What to serve?
I chose 3 teas with various caffeine levels (a classic black tea- full caffeine, my favorite pomegranate white 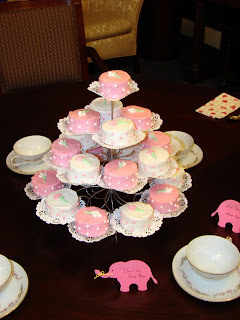 tea from Trader Joe's, and a caffeine-free fruit tea). Green tea would provide another interesting alternative, but it gets quite bitter if it steeps too long. I knew I wouldn't be able to watch it very closely, so I went with teas requiring less observation.

, and I cut out standing labels for the foods and teapots. By inserting a folded index card into the die, I was able to make a perfectly matching standee for the pretty paper cutouts used for labels. I put labels on each teapot using colored embroidery floss tied through a hole in the label. Using a lark's head knot, I could easily attach, remove, and swap teapot labels as needed. As a result, no pots or cups were refilled with the wrong tea.

I put little standees among the different foods. My parents were vegan for many years and I've known lots of people with allergies and other dietary restrictions, so I'm into full disclosure serving. I like to identify in writing all foods I serve. If people want to know ingredient specifics, I'm happy to supply more information. If a dish contains a hidden, serious allergen (like nuts or nut oils), I always try to note that ingredient's presence.

for the brown sugar and turbinado sugar

for the white sugar. We found both substitutions through pantry scarcity and now consider it our secret recipe), the new Girl Scout lemon shortbread cookie, and tiny cream-filled cakes reminiscent of petits fours.

Veronica, Supermom to twins, gifted cake decorator, and bowmaker extraordinaire, offered critical assistance at just the right moment. She decorated 24 tiny cream-filled cakes (that I made from her family's recipe and "leveled"- so forgive her any crooked confections). When the guests entered, they were greeted by her gloriously-presented dessert (on her clever cupcake stand

) which set a gracious tone for the occasion. Veronica's hard work on this small detail really paid off as the initial impression of graciousness lingered despite my careless pouring and other foibles.

There were many great storytellers among the guests, and only a handful were previously acquainted with each other. It was delightful to watch friends from different circles enjoy each other's company. So delightful in fact, that I completely forgot to take pictures or do the single planned activity of the afternoon (a piece of advice written to the child by each guest to be placed in a small scrapbook). Thanks, Asha for this great idea!

Instead, I'm taking the guests' recipes and making baby's first cookbook. The honoree has requested that I include the Scotchies recipe (they're really completely amazing cookies), so I will probably throw in all the recipes from the shower as well (kids need cholesterol, right?).
Posted by adrienne at Monday, April 02, 2007

I think this is an amazing shower idea, especially for a second or third baby when you have all the stuff you need, but you still have to feed the other kids. I'm can't wait for my next friend to have a baby to do this!

I love the freezer-stocking idea and baby's first cookbook, too.

But most of all I love your sentiments about the joy of gathering together in celebration. The fact that you were too busy to take photos or lead plannned activities is a testement to how fun it can be to eat, chat, snack, reminisce, drink tea, eat, and talk to someone you've never met before.

I'm so glad I stumbled here from Asha's parent hacks.

Here is another very unique shower idea that I gave to my son & daughter-in-law -- a gift certificate to a new service that calls everyone when your baby is born. It is so clever!

Just thought I would pass it along. It saved my son a lot of time on the phone telling all of his friends & co-workers about my new grandson.

I love the baby's first cookbook, thanks for this idea.