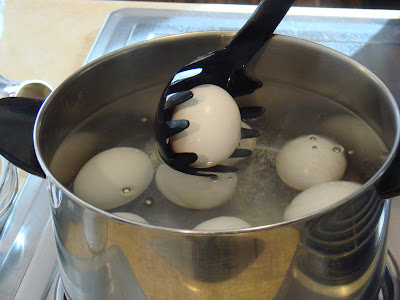 I love egg salad. My friend Kathryn has the best recipe ever for egg salad, but as she's a Southerner it's completely irreproducible for anyone living above the azalea line. She's given it to me more than a dozen times (always when I'm lacking a pen).

"Honey, it's just egg salad- but you MUST use Duke's Mayonnaise [only available at Winn-Dixie, Piggly-Wiggly, and other Southeastern grocery chains] and you take the pickle relish [sweet/dill? I can never remember- and apparently it's essential that you not choose the wrong one] and you squeeze all the juice out of it. Then you put [one portion- either the squoze relish or the juice- another detail I can never conquer] in with the regular egg salad ingredients. Whatever you do, you MUST use Duke's mayonnaise."

Note the complete lack of measurements and proportions. It just makes my head spin, plus it's dangerous to assume I know anything about cooking. Should I ever lay hands on an unexpired jar of Duke's, I may call Kathryn and take one more shot at getting the recipe, but for now I really love the recipe for Pickle Packers International's Auntie M's Deviled Egg Salad. This stuff is seriously delicious (far superior to my own Auntie's egg salad), and, as if that weren't enough it allows one to say "Pickle Packers International" (bonus points)!

Jim and I were making egg salad tea sandwiches for a baby shower, and he dropped the eggs into the large pot of boiling water after punching a pinhole in the big end of each egg. I heard the egg shells cracking together as they dropped into the pot, and I remembered that Jim usually misses the hard-boiling stage of egg salad production. So I taught him a hack that we think useful for religious and secular egg boilers alike.

is great for gently navigating the eggs into and out of a pot of boiling water. It cradles the egg, making them easy to capture and strategically release (unlike a large spoon).

Happy Spring, everyone!
Posted by adrienne at Saturday, March 31, 2007