Hitting the Bottle: Polycarbonate Plastics May Drive Me to Drink

Two months ago, I felt like I knew plenty about baby bottles. Now, I'm not so sure.

We used Dr. Brown's, Soothie, and Avent bottles primarily and felt like we knew each bottle's strengths and weaknesses. This was plenty for a post. I just needed to clear the kitchen counter and take some pictures of our bottle drying and storage areas.

A couple weeks ago, reading Daddy Types, I ran into the ongoing polycarbonate debates. For those of you living further under rocks than me here's a quick summary of the situation from the reasonably impartial WedMD.

I have no idea how I missed these concerns that WebMD addressed in March 2003, but I went on buying polycarbonate Nalgenes and feeling healthy for drinking water from them rather than consuming lots of disposable bottles. We may have missed the recent upsurge in these debates as our area has a major GE presence (the largest Lexan factory in the world is within 30 miles of our home).

Anyway, the research on both sides of the polycarbonate safety issue is hotly debated. It looks like industry funded research stands on one side arguing total safety while environmental groups champion the unsafe argument.

We took a break, did some research, and our household decision has been to abandon the polycarbonate bottle in all forms (Nalgenes and sippy cups as well as baby bottles). Maybe industry research isn't biased and polycarbonates are really, really safe, but why take the chance? If bisphenol-A has the side effects of cancer (especially breast cancer) and infertility, why take the chance?

I have some biases here. While I was an adolescent, my grandmother (after over a decade of struggling with breast cancer) was ravaged by the disease and died in our family home. It was traumatic and terrifying; her death is not the only one I've had close proximity to- it just stripped her life away layer by layer. My brother and I both now have a profound fear of prolonged terminal illness.

Almost a decade later a major motor company bought her home and much of the property adjacent to it for government mandated environmental cleanup. Apparently the stream NEAR her backyard carried horrifying toxins into the neighborhood. My uncle and aunt live next door to my grandma's house. Their adjacent property wasn't addressed in the government mandate and thus didn't "need" environmental cleanup, and there was "nothing [for my aunt and uncle] to worry about." Except they've both gotten aggressive cancers in the past few years. I believe industry looks out for itself regardless of human consequences, so I'm probably more prone to believe that polycarbonates are indeed harmful.

So- we threw out or repurposed our polycarbonate bottles last week. The upside is I now never have to clear my counter for photos and our fastening hardware (nails, screws, etc.) is now a little more organized in clear, unbreakable bottles . 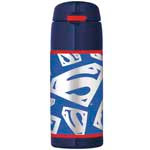 Glass bottles, beyond being impossible to find, were highly impractical replacements with the our local Mad Bomber in the high chair. We're using Playtex drop-ins for the waning formula demands (I can't believe I'm using disposable baby bottles) and some Avent Magic Trainer Sippy Cups (HDPE plastic) with Advent bottle parts on top. We found a great flip-top stainless steel kid Thermos Funtrainer with straw at Meijer on drastic markdown (Superman or Barbie: $3.25+ tax). For the grown-ups we're ordering HDPE Nalgenes (their milky color reminds me of the 70s and my parents' lab-inspired camping and sailing gear).

The scientists and history can hash this debate out, but I'm sure we're getting plenty of Lexan-related chemicals from the air we breathe (we're upstream, but downwind from the factory) without additional bottle leaching.

I just wanted other families to be aware of the controversy and potential risk. Every family will make their own decision on whether to continue using polycarbonates around food. I'm not going to scream and knock these bottles from the hands of babies (as the research is hardly definitive on either side), but I do want every family to be able to make a conscious and informed decision.
Posted by adrienne at Monday, March 26, 2007

I consider myself a pretty resourceful and informed mom, but I also feel like I've been living under a rock! I just went through our cupboards, and found that half the cups my kids use (which I sometimes put in the fridge filled with milk overnight so they are ready in the morning)are either marked with recycling #7 (polycarbonate) or not marked at all, but seem to be polycarbonate.

Your post has prompted me to read so much more, and I agree that there's not enough there to say that they are safe. It's very disturbing.

I found this site that suggests Medela and Evenflo as safe replacements for bottles.
http://www.checnet.org/HealtheHouse/education/articles-detail.asp?Main_ID=333

We have used the Playtex Sipster cups and would recommend them - they are marked with #2 on the bottom.

Try Bjorn Free.. they have different nipples you can use from a traditional nipple, to a soft sippy cup (6-9 months) to a hard sippy cup.. all interchangable and non of that icky chemical.

Man this stuff is frustrating. We're about to have our first child and now this has got me all spooked. I guess the wife and I will start looking for alternatives...

SIGG bottles (which are available at other places too) are awesome. We have one for The Boy, and it is really cool. Although you really need to get their bottle brush to get it clean, IMHO. (Besides, they look really cool. And are pretty much unspillable!)

For a good list and comparison of non-polycarbonate sippy cups on the market- visit Z Recommends' thorough review of BPA free options. There may be a few more non-polycarb options on the market, but they hit all the well-known ones.

Unlike Jenni & Jeremiah at zrecs, we haven't had problems with any Funtainer drop damage (and our has probably been dropped on every surface but brick).

It's truly amazing how often polycarbonates are used in kid's containers. The Gerber plastic 2-packs are all polycarbonate (recycling #7) plastic.

Question for anyone who has a sigg...do they have a model that has a straw? i am looking for a sippy cup with a straw.

Hello! I just came across your blog in search of polycarbonate alternatives, and first want to thank you for posting such a well written summary of this tragedy. And, secondly, when I continued my research I found a bottle and sippy cup website called "BornFree." Check em out!
http://www.newbornfree.com/pics/bornfree/index.htm

Your post has prompted me to read so much more, and I agree that there's not enough there to say that they are safe. It's very disturbing.

In response to the polycarbonate issue (which freaked us a little) we tried several alternatives. Since the little miss is 2 1/2 we looked for something that could last us a while. We bought a Sigg, a Klean Kanteen (with hard Avent spout), and a Thermos Foogo. I like the fact that the Foogo has a straw and a lid that snaps closed to reduce any leakage. Also, the Foogo is insulated. I like the fact that the Klean Kanteen uses an Avent spout. You can use the softer spout that comes with their sippy cups or the harder spout that comes with the Foogo. Then, when they have moved beyond sippy stage completely you can purchase the regular tops that work with the rest of the Klean Kanteen bottles (I use a Klean Kanteen for water myself). The Sigg bottles come with the sport spout and really fun designs. They don't sport a sippy-type or straw spout at all, so although Little Miss can drink out of the spout, she has some trouble opening the spout. The Klean Kanteen and Sigg bottles are uninsulated so sweat a bit and are cold to the touch. We really do like all three -- it just depends on the type you are looking for!