Lean on Me: Sidekick Diaper Bag and Child Carrier

online for almost a year, but I couldn't bring myself to shell out $80 for it.

When I found one, a returned online purchase in black and orange, for $40 at my local Target I couldn't walk past it. It has big, well-placed pockets in profusion. Ranger and I tried it on for carrier fit. I thought gangly 2 year-old Ranger would weigh too much for it at 30 or so pounds, but he and I were both happy with the carrier fit.

After a few days of use, Ranger and I both found the carrier to be comfortable and useful. He likes riding in it, and I find it doesn't cripple me. Much of the weight is distributed to your hips taking notable responsibility off your arms and some of the pressure off your back (all carriers will put additional pressure on your back). It turns out that, with a squirmy two year-old, the carrier is great for short trips or intermittent use on a long walk, but it does start taking a toll with a longterm toddler payload (I think the carrier would be great with a less heavy infant though).

I was so prepared to dislike the carrier that it surprised me to find the carrier was effective and easy to use (after initial adjustments).

The bag that initially grabbed me with its ample pockets ultimately left me with some hesitation and disappointment. While there are many smart, spacious pockets all over the bag- and they're easily accessible EVEN with a child in the carrier- the closures ultimately disappointed me (I think this could easily be remedied with only slight revisions).

The clasps are all magnetic snaps, so they don't close firmly. I lose stuff all the time, so a magnetic clasp between my wallet and the world is a recipe for disaster. Yes, the bag is very deep, but somehow my wallet always seemed to end up pressing against the top flap- begging to escape.

The cell phone pocket is placed very conveniently for use with the carrier deployed, but placing your phone in it while the carrier is not being used causes the large exterior flap not to secure properly. Again, this made me feel like my items were poised to jump from the bag. 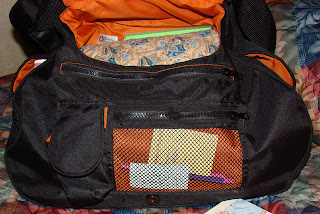 The end pockets worked great for snacks and bottles (and eventually my cell phone and wallet). The main pocket was huge and held a sizable notebook, my Diaper Valet, more snacks, toys, and everything else Ranger hands me in the course of a day. Because of the bag's flexible walls, the 75% loaded main compartment slightly bulged causing the main flap to become unsecured while walking.

The back of the bag has a nice diaper pad pocket with a small changing pad. This pocket is great for stowing a thin board book or two. It also has a zippered diaper pocket on the bottom that offers flat storage for quite a few diapers. 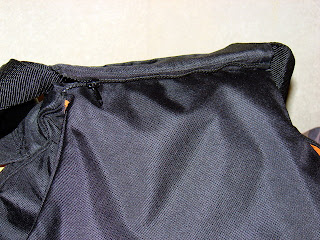 Transforming the bag to carrier is quite easy. There's a single zipper that changes the shoulder strap to a waist strap. This system is really effective, but I was mystified that they chose a zipper without terminal ends. Instead, they sewed the infinite zipper in two curving arcs IN OPPOSITE DIRECTIONS. Really, what were they thinking? The zipper bears a load in the diaper bag position, so it unzips itself (not fully- but usually 25 to 50% of its length) while in diaper bag use. This is a simple design and manufacturing decision, but it actually was the deal-breaker for me using this bag. I got tired of it gapping and requiring repeat zippings with every use. We talked about adding a snap or a hook and eye closure, but in the end- even $40 retail is too much to spend on a bag that requires hacks.

This is a really smart bag design, but the tiny construction details sabotaged a good product. With better closures (velcro or real snaps), a different zipper, and interfacing to strengthen the front panel, it could become a great tool for families with infants and toddlers. If Parents of Invention makes these simple revisions, they'll have a real winner on their hands. Email me if you see a 2.0 or higher version.
Posted by adrienne at Tuesday, August 21, 2007

It looks cool and works very well if you're alone with the kid.

thanks for your blog about the sidekick diaper bag. i got one used for $30, and my baby is too small for it right now.

Thanks for the useful review! Sometimes, reviews read like subsidized advertisements for free gear (can I be a tester?). This review was honest and detailed!