Mom, It's Not Me, It's You: A New Study on the Genetics of Picky Eaters 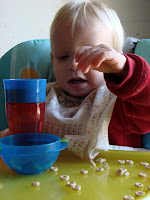 For Ranger's second birthday I made him a banana cake. He's a banana fiend, so it seemed a logical jump. He (and my 35 year-old brother) refused to even try it as it was not familiar. I was disappointed, but hardly surprised.

I could be classified as a picky eater in recovery. When I actually started trying new foods, I found out I had been missing out. Ranger would be happy on the apple, grape, and cracker diet in perpetuity.

An interesting new study through University College London suggests that food reluctance is probably inherited as well as a self-preservation mechanism. Wow.

I thought this might reassure other parents who dread the "does he eat vegetables" dietary interview with the pediatrician. Apparently, most kids lose the majority of their fussiness by 5 and reintroduction of rejected foods can help.

For those of you looking to expand the palate and culinary experience of older kids, please visit Spatulatta- a great cooking site for kids by kids. I love to watch the videos and dream of future days when Ranger and I can cook together.
Posted by adrienne at Tuesday, August 28, 2007