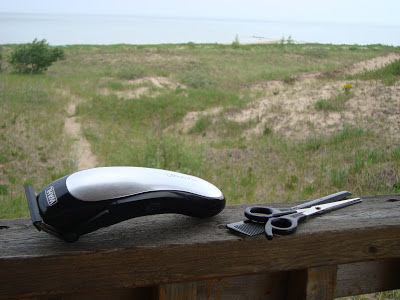 As a household, we've been cost-conscious for a long time. That means many of those "50 Easy Ways to Save Money" articles just don't apply to our lifestyle. Our latte factor really never came into existence, though I have spent my fair share on ice cream products.

Here's one of our best tips for saving money, and it's much easier than it sounds. I'm not suggesting anyone make their own artisanal cheese for savings or raise truffle pigs for extra income. This is more along the lines of trimming a hedge (without the heat and bugs) or hanging a picture.

I give my family haircuts. Just Jim and Ranger, but even two people can add up to substantial savings in a family's annual budget.

Our Hair Cutting Backstory
Jim and I were newly married, still in college and struggling to make ends meet when my parents gave us our first set of hair clippers. Jim was looking rather shaggy at the time because we were choosing food and shelter over haircuts.

My mom has always cut my dad's hair, and my dad cut my brother's and mine while we were growing up. I didn't have a bowl cut exactly. It was a bowl with bangs; it was like I was trying to impersonate a Playmobil child. My brother's haircuts were slightly longer than military-issued, but he wears his hair that way again (and it suits him). For the record, my brother's last "professional" haircut was given to him by the Air Force in the mid-1990s. He cuts his own hair, and it looks great. So great, in fact, that his friends often get him to cut theirs as well because his talent in drawing translates into true style (think modern superhero).

Unlike my brother, my drawing is functional at best. I do okay at Pictionary, but even with hours of drawing time, I can't produce a recognizable person- much less one that wouldn't insult its model.

My only previous experience cutting hair was when my college friend asked me to trim her bangs. My nervousness and repeat attempts to "even things up" left her with a horribly short, off-kilter fringe most suitable for a youth in the 1964 film Children of the Damned. Not yet in my twenties, I swore off the life tonsorial.

Jim's a brave guy with fast growing hair and a notable aversion to styling-chair small talk. Like a surprising number of men, I think he would seriously consider getting a friar's tonsure if the barber had taken a vow of silence. Maybe this haircut has always been more tolerable than obligatory chit-chat.

When Jim tells other men that I cut his hair, almost every one responds with an envious statement wishing their significant others were willing to cut their hair.

I had to entice Ranger away from the kid's barber shop with video games and race car seats, but found that I could easily buy his haircut opportunity with a) video game time or b) considerably less cash than a professional haircut.

The Savings: Time and Money
Even at a bargain $15 cut quarterly for two people, that comes out to $120 a year. When things aren't completely off the hook at our house, I cut their hair bimonthly or monthly which comes out to $180 to $360 annually.

If someone needs a haircut for a special occasion, I only need to clear a half hour of time (which is less time than I spend in the kid salon's sticky waiting area trying to keep my toddler from her ongoing quest to create a superbug).

My "Training"
I watched the instructional VCR tape that came with the clippers and read my dad's copy of Haircutting the Professional [Playmobil] Way by Bruno (whose single name seems only to be a protective measure against the angry children of adherents). Then, with an advance apology, I cut Jim's hair. I was pretty sure he'd be as devastated by my work as my micro-fringed friend and would soon be investing in pony tail holders.

But that first haircut was not awful. Jim didn't look like a member of the cast of Children of the Corn, a military unit or a leather-clad hate group. It wasn't a great hair cut, but he had paid for worse professional cuts.

Over the years, the quality has improved (though some cuts have shown my learning curve more than others). Jim consistently gets compliments on his hair cuts.

While you can always borrow my VCR tape, Wahl now offers a how-to website with expanded information about contemporary hair cuts. I do wish they would feature more styles for women as families who buy their clippers are likely to be interested in longer styles, layering and women's bangs styles.

The convenience of home hair cuts has me eyeing the girl's curly locks and even my own wavy mop for further savings. I've been spending more time on YouTube watching people cut hair than your average bookish geek.

The Tools
Our first set of clippers, a Wahl home haircut set, are still in lovely working order after almost two decades of use. We diligently clean and oil the blades before storing, so they have years more use in them.

Recently, Wahl offered me an opportunity to try their new Lithium Ion Clipper. I jumped at the chance. It only takes one home haircut to realize that the cord is an obstacle while cutting. Yet I didn't want to venture $69.99 to find out if the battery could offer enough power to keep those blades flying along for clean cuts.

The Wahl Lithium Ion Clipper cuts beautifully and holds a charge through multiple haircuts and months of storage. Not having a cord speeds up the hair cut as I can easily walk in a circle around the person without worrying about catching them (or myself) in the cord. 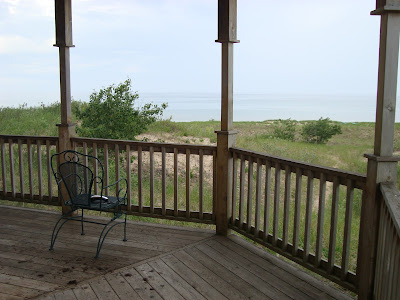 These cordless clippers open up new haircut locations. I just cut Jim's hair on the porch of my parents' vacation rental along the inland shore. I've cut Ranger's hair in a hotel bathroom before a large family gathering. Admittedly, this setting made me feel a little like the parents in Running On Empty, but he looked good in the group photos.

Because of past experience with cordless shavers, I feared that the clipper battery might putter out mid-cut. As no one in my family would find a partial cut too amusing (on themselves, at least), I was thrilled to see that I could run the clippers on power using the charger input (which is designed with a long enough cord to accommodate AC-powered cutting).

The Recommendation
The Wahl Lithium Ion Clipper's cordless use makes it a lot easier to cut my family's hair. If I were buying a new set of clippers, especially as a beginner, it would be my first choice. The Lithium Ion set includes everything I need to cut Jim and Ranger's hair in a broad array of styles. 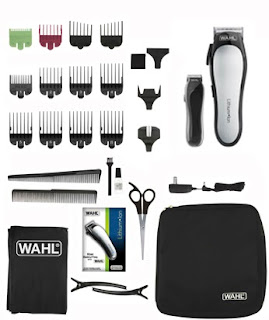 Some of the most used tools in our hair cut kit are the slim haircutting scissors and stylist's comb. With both Jim and Ranger, I hand crown of their hair and use clippers on the sides and back. The included sheers are sharp and straight, and the fine-toothed comb offers more precision and better perspective than any of our regular combs.

The ear guides (both the traditional left/right set and the newer dual side ear guard) simplify the hardest region of traditional hair cutting.

Great extras like the eyebrow trimming guard offer easy solutions for old problems. Before, an eyebrow trim required a steady hand to hold a comb at just the right distance while operating the clippers with the other hand. It was pretty awkward on someone else- and ridiculously unwieldy on oneself (so I've heard). A momentary loss of balance by either hand can reduce portions of a brow to short stubble (or so I've heard). The new guards make this pretty much goof-proof.

Our Wahl Lithium Ion set even included a small trimmer for brows, beards, and other touch-ups. It's lighter-weight than the full clipper, so it's easier to manipulate for interim touch-ups.

The Wahl set also includes a cutting cape. While this cape is functional, we don't like it as much as the rest of the set. If you're going to cut hair with regularity, it's worth taking the plunge on a nylon hair cutting cape with snap closures. We have one that fits children and adults. The clipped hair slides off the nylon more easily because it lays flatter than the vinyl cape. There aren't as many places where the hair can gather. It is preferable that the clippings end up on the floor. Otherwise, they can end up everywhere in the house. And should the clippings get down someone's collar, they itch enough that even a grown person will have a hard time sitting still.

...as for kids sitting still
Steal a play from the race car seat salon and let the kids watch something on an elevated screen (keeps their chins up) or play a video game (also on an elevated screen if possible, though I have been known to offer a DS in a plastic bag on occasion). As Ranger gets older, I don't always need these enticements, but I do find myself endlessly repeating "head up" and "chin up." Like most people who spent time with kids, I've come to accept an shocking level of repetition in discourse and activities.


Have you ever cut your family's hair? If so, what tips and techniques help you? If not, what are your concerns?

***Baby Toolkit is the tale of a Midwestern family written by some geeky parents. We received a free Wahl Lithium Ion Clipper set from their representatives, but our opinions are entirely our own and freely given. We are Amazon associates, so any purchases made through our links help pay our operating costs (thanks!). We also podcast about family and community board gaming at GreatBigTable.com.
Posted by adrienne at Friday, June 28, 2013