A Banner By Any Other Name: Sew A Custom Name Bunting

My sewing machine is limping along. I'm not sure if I've simply worn out some of the plastic parts or if Ranger's covert "adjustments" have actually caused damage. Let's just pretend I sewed the machine to death, it's a far cooler scenario.

One of my favorite sewing projects this year is pennant flag name banners (or buntings for you Brits). Back in February, I made two for young friends (earlier post). The simple freezer paper stenciled prototypes have evolved to a fancier model after Emma, my sewing mentor, taught me to applique mid-Spring.

So here are all my custom bunting sewing secrets in stream-of-consciousness tutorial form.

Supplies (for 8 letter name banner)Equipment:Part 1: Cut Out Your Parts 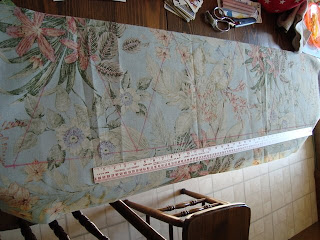 1. Mark the front fabric. Using the front pennant fabric, mark with your chalk pencil two lines 11" apart (this will be the height of the pennant). Beginning at one side of the fabric mark 10" (pennant width) intervals across the top line. On the lower line mark one 5" distance then 10" intervals. By tracing between the two lines' intervals, you should end up with a uniform series of triangles. If you need more triangles than a single row affords, mark a third horizontal line 11" below your existing line and note 10" intervals. Fill in the diagonals to the middle line for more triangles.

3. Cut along the top and bottom lines with standard shears. Cut the diagonal lines with pinking shears (this prevents fraying of the raw edges).

4. Mark your interfacing for letter applique. With the paper side DOWN, stencil or draw on the letter outlines; Alternately, I find it easier to stencil the letters on

the paper side BACKWARDS, but I don't recommend drawing them this way unless you're very gifted at mirror writing. Cut out letters.

5. Line up the letters paper side up on the back of the applique fabric. Once you're satisfied with their placement and orientation, pin in place. Iron according to interfacing directions.

6. Using standard sheers, cut around the edge of the interfacing. Check the letters to be sure they're facing the correct direction.

I usually take a minute here to lay out all the letters and pennant fronts together. With patterned fabrics like the one used in the example, some letters look better on one pennant than others.

7. Remove the paper backing from the letters. With the right side of the pennant front facing up, center a letter on each pennant. Pin in place. Iron letters to pennant fronts according to interfacing instructions. 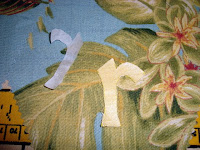 8. Thread machine with applique thread. Set your machine to a satin stitch or a very short zig zag stitch. Stitch around the raw edges of the letters to prevent unraveling. 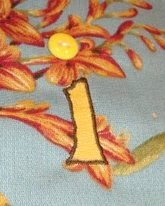 9. If you're using buttons for the tops of is and js, sew them on now.

Part 3: Sew pennant backs and fronts together
10. Place the frontpieces right side up on the back of the rear pennants. If they're different sizes, center the front pennant on the back one. Pin together. 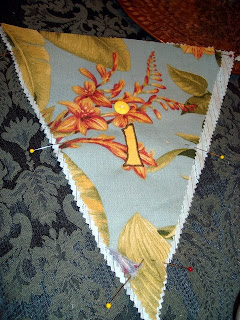 13. Open your bias tape and pin the narrow side to the top your central pennant (letter side up). 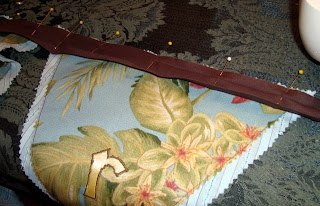 Radiating out from that central pennant pen pin on your other pennants in the same way.

15. Starting at the first pennant and working to the last one, sew a straight stitch JUST ABOVE the top fold in the bias tape. This stitch will be hidden later by the folded bias tape.

16. Fold the bias tape over the top of the pennants and pin into place. 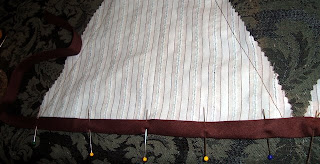 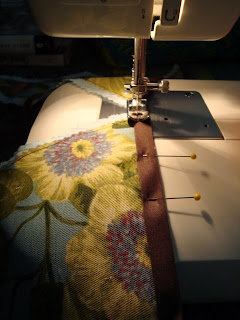 18. Pat yourself on the back. You are done and it looks fabulous!

Questions, comments, poxes upon my house?
Posted by adrienne at Friday, October 17, 2008

thanks for the tutorial. :) I found it thru Google.

that is so cool! thanks for the tutorial!

Just Googled this and am thrilled for the tute. I made mine 1" longer to use up the fabric and I'm pleased with the results.

I can't really sew, but was able to fuse the two sides together and cut out with pinking shears with decent results. Will fuse on fabric letters and hand-sew triangles into bias tape once baby arrives. Sure wish I could applique... Thanks again!

We LOVE our banners!!! I'm reminded that we have some more pictures (of your thoughtful gifts hanging in our home) which we want to share with you!

Not only do I think it's cool that you can make great stuff like this for un-crafty people like me, but also that you can share your experience with others, so many other go-getter types can tackle the project and make their friends and family blessed with lovely personalized gifts!

Thanks for the tutorial> I am working on a penant banner for my craft fair booth, and these directions are helpful!