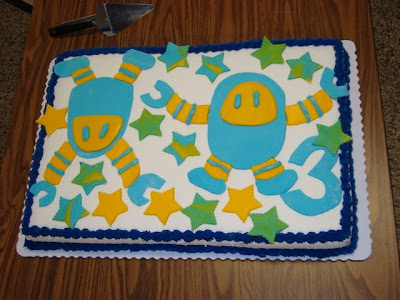 We spent a lot of time last month deliberating about Ranger's birthday cake. It was a big issue because we were throwing his first friends and family birthday party ever, and (feeling inclusive) we invited over 40 families (most with toddlers and kids).

In an additional act of insanity, we didn't ask for RSVPs, so we knew we could expect anywhere from 3-100 attendees. That's potentially a lot of cake. While we love and advocate homemade cake, the thought of making and transporting 100 cupcakes or a giant sheet cake was overwhelming.

So we ordered a big sheet cake from a local warehouse club. Ranger chose blue for the trim color, and the bakery employee kind of blinked at me when I said I wanted a blank white top.

"And what words do you want on it?"

"No words. Just the flat white icing and the blue trim."

With a raise of the eyebrows, she accepted my request and filed the cake order away.

Jim, either in an act of diplomacy or trying to dissociate himself from the insanity attributed to me said "We're going to put our own robots on it!"

Her look said "I'm sure you will, honey," but her mouth said "That's great," as she BACKED into the employee only area of the store. 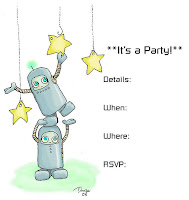 So, the Jones master plan was to make robots similar to those on our AWESOME Creative Commons robot invitations (thank you, Dot of Dabbled, for being so generous in sharing all your great original images and robot party ideas) to top Ranger's bakery cake.

Dot's beautiful 3D robot cake had been our original inspiration for birthday dessert, but we couldn't envision the fleet of robots we would require successfully making the car trip from our house to the party location. It did however, inspire us to look into fondant.

A cake making friend describes fondant as inedible, so I wasn't in any rush to buy premade. Google offered good recipes and tutorials for marshmallow fondant (which is primarily marshmallow and powdered sugar), so Jim and I spent an evening making and kneading the fondant.

The first steps are much like rice crispy treats- melting marshmallows to hot goo. Then- on very greased surfaces and with downright slippery hands- you mix in colors, then knead in the powdered sugar. The mixture turns into a rather adhesive dough until you really saturate it with powdered sugar.

Ranger wandered into the kitchen soon after we started the kneading process. He found Jim with hands stuck in what looked like a giant yellow glob of chewed bubble gum and me with cerulean mitts closely resembling melting smurf hands.

His only response is a wave of hysterical laughter. A wide-eyed Ranger BACKS out of the kitchen.

After letting the fondant set up in the fridge overnight, we rolled it out and Jim cut out the robot shapes. We had lots of fondant left, so I grabbed a cookie cutter and cut out a dozen or so stars. We even marbled the two colors together to get some multicolored stars.

The end product was well received (it was cake and sugar, after all).
Posted by adrienne at Monday, September 08, 2008

When Miss B was 2, I made an Elmo cake out of a round, 2 layer cake. I mixed cool-whip and powdered sugar, tinted it red (actually it was more pink, so I sprinkled the top with red sugar), added white dollops and black dots for eyes and drew on a mouth. It wasn't bad.

The next year I thought I would do the same thing, just with blue and make Cookie Monster. Except I forgot to add the powdered sugar. So the cool whip and food coloring ended up quite runny. The horrifying result of this was that the slight curvature of the top of the cake was just enough to make poor Cookie Monster's eyes slide right off the top of his head. It was like watching that awful scene in Raiders of the Lost Ark when the faces of the soldiers all melt off... just with friendly Sesame Street characters instead. We have luckily managed to avoid therapy for Miss B so far.

We also ordered a blank cake this past year for my 8.y.o. I think it had a simple bday message and then we put his own Pokemon figurines on top. He thought it was da bomb.

This is such a great idea! It's a time saver but yet Ranger still gets something homemade which is always special.

I LOVED the part where he walks with you and your husband kneading the fondant and asks "What happened?"

I almost fell out of my seat imagining it :D

"What happened?" was actually one of Ranger's first two word phrases.

His delivery and timing of this question usually shine with comedy.

Oh man! I just teared up at how cute the robots came out on your cake! I was perusing my reader and said 'oh how cool, that looks kinda like my robots...' Fabulous job on it..

Thanks for the link over and for using the ideas!

Geez I am soooo jealous of your overall creation. Nice job to the dad with the designing!

Can I use your cake photo for an article I am writing for http://boutiqueflair.ning.com
??

That cake rocks, Adrienne! How totally amazing for Ranger! My sole cake-making attempt was for my own 17th birthday and it was... let's just say we didn't eat it.

oh, just noticed you were linked at Craftzine :)