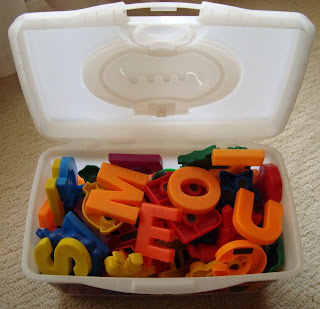 Whenever we buy a warehouse box of wipes, we get another pop-up dispenser box. This isn't a real boon since we're still using our original wipes box at the changing table and our second wipes box downstairs.

A friend's brother uses some of our surplus boxes to organize and store auto parts and hardware bits in his garage.

Ranger's been pretty obsessed with his magnetic letters lately. Late last year he explored the house for new magnetic surfaces, so now magnetic letters, shapes, and potholders can be found hanging on many doors and appliances around the house.

The bulk of the letters used to travel together around the house in a lidless cardboard Clementine box. In the last week, that box has been deemed perfect for marble play, so the letters would be randomly heaped in front of doors. 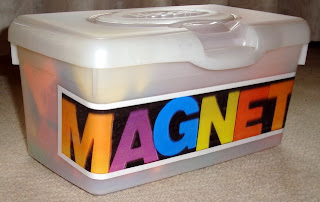 The wipes box was perfect for holding his letter collection. At least until Ranger decided to use it to hold two marbles and the alphabet heaps began reappearing around the house. A label seemed like it might help as long as Ranger could read it.

I scanned some letters for a label (our scanner has a glass bed so all voids show as black space) and printed the resulting image. It easily attached to the box with two strips of packaging tape. Ranger now understands that the box has specific purpose.

How do you help toddlers learn to put stuff away?
Posted by adrienne at Wednesday, August 06, 2008

i love the idea of scanning the actual item to make the label! I'll have to try that. And I need all the tips i can get because my 3 yr old is awful at putting things away.

I love the clarity of the scan with the word. I use digital photos and print 2 copies. one is taped to the box, and the other on the closet or shelf the toy goes on. This really helped with the larger toys that only fit on the one shelf- frustration would set in when J would try to put it on the shorter shelves. Now she looks for the pictures.

LOL my son actually did this himself about a month ago, I figured I'd let him play with some empty wipe containers and then one day lo and behold he actually had all his magnetic letters/numbers in the box. He had been pushing them through the middle into the container it's been there home ever since he started this himself! He's 17 months old.

loove the label! too cool! love the organization too.

ha ha ha! Love the labels. On the one hand, this makes me think of preschool and that I can do it and should do it. On the other hand, I want to invite you over and ask you to organize me. What are you doing on Wednesday?

Hey, another good way to use up old wipe tubs is to make them homemade household cleaning wipes - http://organizedhome.com/make-your-own-cleaning-wipes has all the ingredients for natural cleaners. I'm thinking of doing this because I have all the tubs I got at my baby shower still kicking around.

way to go for recycling! and I find that it's easier to get things put away if everything has a home. . .

We've done similar things by just taking a pic with our digital camera. I love the wipee boxes too. They are incredibly versatile (and cheap!) for arranging our stuff.