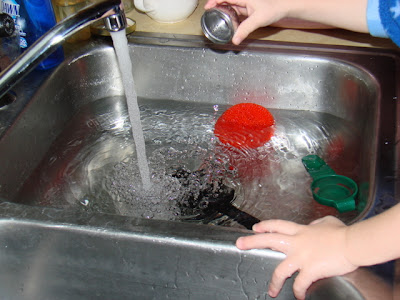 Ranger loves water. Maybe I swam too much during his pregnancy, but he's always pulling a chair over to "help" whenever I'm washing dishes. The wash water is too hot, so he's not allowed to help.

Yesterday he pulled a chair over when I was just finishing up, so I let him run a sink of cool water to "SPLASH!"

In past attempts at sink play, I have given him a cup and lived to regret it. When his enthusiasm for pouring outmatched his aim he created minor floods encompassing the floor, wooden chair, cabinet fronts, and counters.

To lessen his munitions without diminishing his enjoyment, I substituted intentionally leaky vessels for his normal cup and spoon. He showed no signs of disappointment at receiving a pot scrubber, a slotted spoon, an egg separator, a potato masher, and half a tea ball.

He played for over half an hour and much less than the normal thirty gallons escaped the sink. Good times were had by all. Next time we'll probably add a colander to the mix.

***This is the independent opinion of the geek parents at Baby Toolkit and should be taken with a grain of salt. Baby Toolkit, (c) 2008
Posted by adrienne at Wednesday, January 09, 2008

We use a big plastic colander to store bath toys. The other night our 2-year-old grabbed it and tossed the whole thing into the tub (toys and all). He had more fun with the colander than with the toys. It makes a great "shower" (we filled it up, held it over his head, and let the water run through). Pretty cool. :-)

It's funny how you can spend lots of money on fancy toys, but kids will find fun in something like the kitchen sink.