Monkey On My Back: Kelty Backpack Carriers

During one of the warmest, most expansive months of my pregnancy with Ranger, I found myself in Oakbrook, IL- home of a great REI store. When I walked into the store I only needed a watch with lap timers for swimming, but I desperately wanted to buy something exuding family fitness. Just a couple days before I had been diagnosed with insulin-dependent gestational diabetes, and I wanted to prove that I was actually more concerned about my health than the little bottle of insulin in my hotel room seemed to suggest. In retrospect, my motives were completely silly but, in all honesty, buying this specific piece of gear did make me feel better. 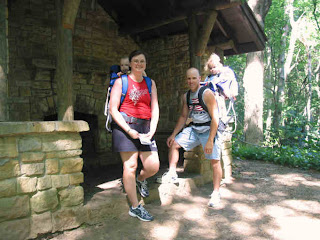 REI is a great place to test a backpack carrier. They have a stuffed bear in the child carriers area that is weighted to match a small infant. Definitely test babypacks with the bear in them. It's a very different feel from an empty pack. Sure, the bear is sometimes off-balance, but this is realistic as your child will at times work to be off-balance as well.

We bought a Kelty Pathfinder (for aroung $200), and it's a great carrier for older infants and toddlers. I'd definitely categorize this type of high-end pack as luxury gear rather than necessary gear. Maybe it's the hellish heat and West Nile mosquitoes of Southern Indiana talking, but we tend to use this more when traveling than at home. That doesn't prevent the carrier from getting a lot of use. Quite a few of our friends (pictured here- nope, that's not us!) have been stomping around in the woods with them on hikes or letterboxing adventures. 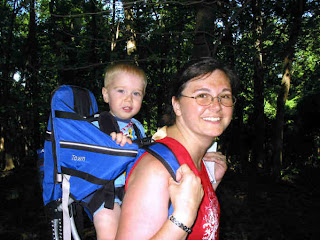 [I say them because I got incredibly lucky and scored a well-maintained Kelty Tour (a lighter and cooler variation on the Pathfinder with mesh panels against your back and no chest strap) for $35 at a great consignment sale.]

For a lot of families, this would be a good item to borrow from friends/lend to friends unless you'll be using it every weekend. This summer our packs have kept up with the schedules of two pretty active families in addition to our own, less motivated, schedule.

This type of frame backpack carrier requires an infant with ample experience sitting up unsupported and holding up their head despite jangling. We put Ranger in shortly after he could sit and hold his head up and the spring of our steps bounced his head in ways that looked uncomfortable and made him cry. When we tried again a few weeks later, he loved the bounce and the perspective.

In ideal weather, the Pathfinder is my favorite pack. Its chest strap makes for a fabulous fit for the long haul. But the weather isn't often ideal here, and that's where the Tour model comes in handy. The ventilated back panel is a great feature on hot, humid days.

The real "I love this gear" epiphany moment for Jim was at the West Side Nut Club Fall Festival (think German Octoberfest). The festival, at one time was hailed as the second largest free, outdoor, food festival (after Mardi Gras). While this festival occupies a geographically large area, it's crazily congested with people from lunchtime on. At night, it can be impossible to traverse with a stroller. The few people who bring strollers usually end up carrying their kids while their companions push the strollers because the kids either freak out at being completely walled in or the kids get banged into so often you wish your stroller was armored.

A lot of parents use front carriers at the festival. This works really well for small, sleepy infants, but can be backbreaking when they're over 15 pounds and still keeps the baby's view pretty limited to body parts (yours if facing in and everyone else's if facing out). These views, coupled with noise, lines, and the distinctive smells of sauerkraut or funnel cakes, don't make for happy little travelers.

So there we were, strolling along with Ranger perched comfortably high on Jim's back. No one's hands were occupied with baby nor gear (there's a diaperbag backpack on the Pathfinder for supplies). We were streamlined, so we could move casually through crowded places. We could get out our wallets to pay. We could carry food.

But, it wasn't the sheer convenience of the pack that sold Jim fully, it was the envious looks of all the other dads carrying kids (with or without frontpacks) as their stroller prevented them from moving more than one or two feet in any direction without having to ask someone to let them through. In parent world, this type of pack is definitely trophy gear. It was fun watching parents point out the backpack to each other. And I think Ranger loved the attention too. He was effervescent as we walked around the festival well past his bedtime (though that may have been the lemon shake-ups).

The Kelty's have a surprisingly long period of use with youngsters and they are made to last. The packs can hold a child up to 40 pounds (which is a still few pounds lighter than Jim's college packpack).

*Baby Toolkit is the independent opinion of Jim and Adrienne Jones at babytoolkit.blogspot.com. We have received no materials or compensation of any kind from Kelty KIDS or their affiliates. We just love to write about baby gear.
Posted by adrienne at Friday, September 07, 2007