These Booties Are Made For Wearing: An Alternative to Supergluing Shoes and Socks 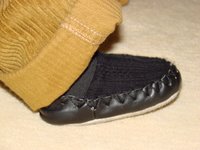 Baby Geek, like most other geeks, can't help but tinker. His status as a baby however, affords him only a limited amount of objects for tinkering. Socks are really ideal because they usually are in close proximity (at least initially) and they have the magical power of being reinstated after being discarded. What perfect objects for manipulation.

With his ongoing fascination with socks and their removal, one would assume that shoes would be even more well-received as they are simply a more advanced version of the same puzzle. Sadly, this was not the case. The first (and last) time we put conventional shoes on Baby Geek, he screamed like animal caught in a trap- a very painful trap with large and pointy teeth. He clawed at his feet and screamed with such a level of duress that our neighbors started piling into their tornado shelters at the sound of his inhuman wail. [No, we were not wearing any hearing protection at the time.] The shoes were a little big and were completely free of the deadly spiders common in our region.

He laid on his belly and wept/screamed even after the offending footwear was removed. This was not a tantrum- it was wholesale terror on his part. As a rare concession, we swore off all footwear for the entire summer (with the rare exception of socks that he would readily dispatch to the Great Lost and Found Box in the Sky).

As the fall weather began to turn cool, I realized that I would have to either wardrobe him entirely in footie jammies, force him to wear socks and shoes, face prosecution for barefoot child neglect, or find some shoes that wouldn't turn him into a wounded creature.

Researching new footwear seemed necessary. I called my dear friend with two older children- each of whom possess a strong will and two feet. 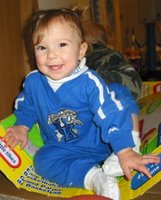 me: "Did your kids like shoes when they were little?"

friend: "Suffered through with our oldest. For our youngest, my sister-in-law sent me striped slipper socks from Hanna Andersson. He wore them all Fall, Winter, and Spring. They were totally worn out by the time he outgrew them."

Immediately after ending the call, I was googling: Hanna Andersson, "slipper socks," "moccasin socks," "baby moccasins," and so on. It appears the Swedes have know about the magical staying power of slipper socks for generations (but maybe it's no wonder with their cool climate).

While I liked Hanna Andersson's slippers, I was intruiged by Nowa Li's Cable Knit Moccasin's elastic strap at the ankle ($18.95 + s/h). This baby-removal prevention device seemed promising, maybe too promising to be true.

When the parcel arrived from New Jersey, my older punk-rock brother and his fine friend Brother Hezekiah of punk-bluegrass fusion band Colonel Sander's Grave were over.

"My mom used to make me wear Buster Browns in elementary school. Those were worse. Even the nuns made fun of me." [Brother Hezekiah]

Undaunted, I put them on Baby Geek who responded with atypical indifference. He paid them no mind and they ranked as "inoffensive" which is the best one can hope for with toddlers and teenagers.

Baby Geek has worn them almost daily since their arrival. We absolutely adore them and on the days he hasn't worn them he was wearing his Firetruck moccasins (no elastic ankle band, but a stylish pattern and a great clearance price of $9). Nowa Li's flame moccasin might have been the best choice in the eyes of Uncle Punk and Bro. Hezekiah, but alas, they were already sold out.

There really is a substantial mechanical advantage to the elastic banded moccassin. They are 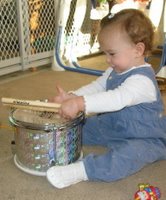 more difficult for the baby to remove, although not impossible. The elastic band makes toe-pulling alone completely ineffectual. To remove the moccasin, one must first pull down on the heel before pulling on the toe. This confounds tiny babes and seems like too much trouble for older ones.

The regular slipper sock style moccasins are more easily removed through toe-tugging, but overall, Baby Geek is content to leave them on his feet. Only when he's bored in the car seat or stroller does he remove the regular mocs. He has only removed the cable knit ones twice (most likely to prove it could be done and then prove that the results were replicable).
Baby Geek's moccasins have attracted much attention among our friends with infants. More and more of his cohort (like the gorgeous twin pictured in the white and slippers) are now wearing Nowa Li moccasins. 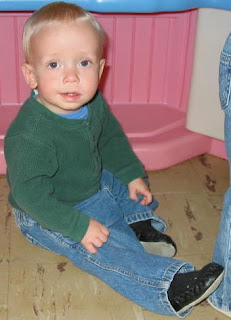 They will be a generation with "ballet slipper" photographs. At least their generation will be able to photoshop in little combat boots when they're older.

Update: 12/4/06
It turns out that Nowa Li manufactures the Hannah Andersson brand slipper socks and moccasins.

In case any adult is jealous of such cozy footwear, Nowa Li offers cable knit moccasins in grown-up sizes (navy or oatmeal).

The sizes run a little large, so we order one size smaller in children's slippers than the size chart suggests. The adult size chart is for men- not women- and it also runs large.
Posted by adrienne at Tuesday, November 14, 2006

I really like the Trumpette Baby Socks. They look like shoes and come in three different styles for girls! Pixie, Ballerina and Mary Jane!

Just in case you're wondering:

The above post was deleted because it was spam, not because they hated the booties or said anything crazy.

Crazy is a staple around here. Spam is annoying. We're okay with opposing views though- they offer balance, perspective, and sometimes even insight. Heck, we're fallible. (There, the cat's out of the bag....)

I forgot to turn on comment moderation originally. This post encouraged me to check all the settings a second time.

Don't forget the Johnny socks for boys. They remind of the Converse All-Stars so popular when I was in high school and college.

They didn't come out until BabyGeek was beyond wearing socks alone, so I've just drooled over them. How do they fit?

SIZING: I keep forgetting to add that Nowalis run REALLY BIG. Buy a size smaller than the one you think you need if your kids feet are average for their age.

The adult sizes shown are for MEN and also run about size larger than the sizing chart reflects (so buying 1 size smaller can make for a better fit).