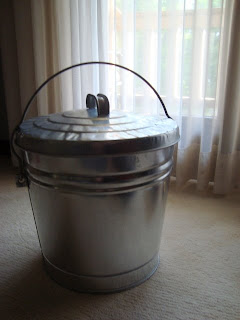 Earlier this year, our once-revived Diaper Champ went down for the final count. Though replacing the seals extended the useful life of the Champ, there was nothing we could to do to stop the stink from moving into the porous plastic parts.

The Diaper Champ perpetually smelled like a convention of port-a-potties on a hot day. I didn't want to deal with this reality, but when I opened it one day to find a dozen staggering drain flies circling inside, I knew its useful life was over. I bagged the Champ, diapers, drain flies, and all. When Jim dropped it in the compactor at our local waste disposal station, he ran back to the car.

"Hurry, they've firing up the compactor!"

I started the engine just in time to hear the Champ's plastic sides blow out, popping the bag.

"Mosquitos!" Ranger proclaimed as a cloud of drain flies blackened out the sky over the facility. With slow deliberation, I drove nonchalantly away from the creeping smell. 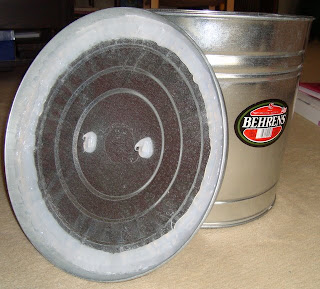 We talked about buying another Diaper Champ to see if the next generation is indeed improved, but decided such stink free plastic pails to be mere pipe dreams. Plus, there's not much sustainability in recycling one of those giant plastic stinkholes for each child we raise.

So we went with an earlier plan involving a metal pail with a tightly locking lid. We got a small steel can at Lowe's for $13.98 and (this time) a brand new tube of caulk (learning from our previous curing problems).

On the underside of the lid, Jim put two beads of caulk on the handle bases and three concentric circles of caulk around the outer edges. After a few days off-gassing on our porch, the pail was ready for use. 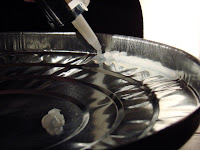 We just use a kitchen trash bag inside of it and twist it closed after each diaper. The inside of the pail reeks, but when closed exudes no olfactory offense to bystanders. It's not a 1-handed disposal, but it's easier than carrying every single diaper downstairs and out to the main trash in the garage and it uses far less plastic than individually bagging each stinkbomb (we really don't like plastic bags) and putting them in indoor trashcans.

After a few weeks of field testing, we've found that the diaper pail doesn't retain a smell when not in use- and the drain fly population seems to be nearing extinction in our household.

How do you keep the air fresh during the diapering years?

Update (9/10/08): The pail kept the stink under control, but couldn't win against the drain flies. We've since purchased a different version of the Diaper Champ.

I don't have any suggestions, but I may have to try this. We have twins and use a cheapie plastic garbage can with a lid, and the stink has really gotten out of control lately.

if only getting to the hardware store was easier than it actually is, this project might be attempted!

Cloth diapers and a zippered hanging pail wetbag that is just washed with them.