Re-covering the past: The Sentimental Value of Other People's Furniture 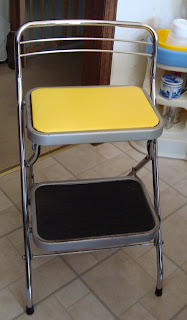 Our house is decorate primarily in OPF (Other People's Furniture). Marrying young and poor, we quickly became magnets for anything that friends or relations were giving away. This set a precedent of a home full of artifacts from those we love. Even when we both had professional jobs, we found we didn't want to part with grandma's couch, mom's childhood dresser, auntie's steamer trunk with all its old shipping labels, or the huge and gracious dining room table that served two generations of Oregon Joneses before us.

Throughout childhood, I could always find the same folding step stool in every house we owned. It was a great toddler seat, so it's a prominently featured element of many family event photos.

After my grandmother died, I inherited her step stool which happens to be identical to the one still in my mom's kitchen. The stool moved into our first house's kitchen, but it was relegated to a closet when we moved here. There are only a few nooks and crannies that we can't access while standing on the floor, so there didn't seem to be much of a point in keeping it out when an already handy chair could serve in a pinch.

That was, until a few weeks ago when I momentarily lost my balance standing on a chair. Fortunately, I caught myself as only Ranger and I were home and he's hardly ready to pick me up off the floor or call 9-1-1. 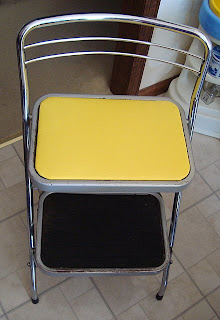 After a lecture from Jim (which I totally resisted to acknowledge as sensible), I noticed that Ranger's beloved Richard Scarry Busytown videos have a musical segment on kitchen safety for kids which includes NEVER standing on a chair. The fact that Jim's advice was as elementary as the concepts that stoves are hot and knives are sharp tweeked my conscience.

The stool emerged that afternoon from its closet entombment. Ranger immediately found it awesome, and I realized that decades of regular use had left it with more grime and damage than in my memories.

After a good scrubbing, the foot tread was black again, but the top step/seat had faded from cheerful yellow to sad off-white and was tearing at the corners.

So I replaced the vinyl and padding on the seat. For $3, I found some vinyl that matched the cheerful yellow of my childhood and the new padding (low loft polyester quilt batting) cost around $1 more.

I removed the seat pad and cleaned under it (the dark spots in the photo are places where the metal is discolored or scuffed). The seat pad is a thin wooden piece of pressboard topped with batting then covered with vinyl and stapled. I pulled out all the staples and found that the cotton batting was worn flat and stained from spills that seeped under the seat. Using the old vinyl and batting as templates, I cut two layers of fresh batting and one piece of new vinyl. After some stretching and stapling, the seat pad was refreshed and replaced.

Such a small refurbishing project results in sweet flashback of childhood in the kitchen. I'm delighted every time Ranger perches on it.
Posted by adrienne at Tuesday, August 26, 2008

it looks new! love it!

You inspire me, friend! I would never figure out how to fix the stepstool, but you are a champion of home projects!!! Woohoo for you!

I love those chairs. It was my favorite place to sit growing up. We have one of the new ones (http://tinyurl.com/5on3da)in our house and our 6 year old niece uses it whenever they eat at our house.

I remember a similar stool in my grandma's house in the 60's. Thanks for the pleasant flashback!