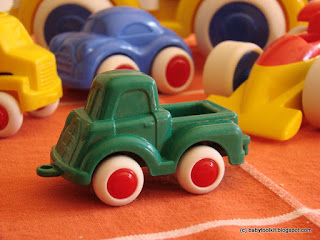 As 2010 draws to a close at the toy-strewn Jones Ranch, we're commemorating the year's closure by enacting a rather typical 2010 evening- carry-out food and Mythbusters on Netflix streaming.

Beyond "more sleep" and "fewer episodes of Barney" (the price of literate preschoolers operating Netflix streaming), Jim and I are waaay too tired to conjure new resolutions.

We're thankful to be spending this mundane evening with our little family at home.  A quiet night together is welcome respite.

May your 2011 be full of quotidian joys and comforts.  Peace and goodwill to you, friends, as we travel through this turbulent life.
Posted by adrienne at Friday, December 31, 2010 No comments:

Email ThisBlogThis!Share to TwitterShare to FacebookShare to Pinterest
Labels: meta

Her First Mistake: Our Story of Premature Birth


A few weeks ago I loaded the kids into the car, handed the keys to my dad, and told Ranger that I'd pick him up from preschool dismissal in a few hours.  Although my energy levels were low and I was having a few strange symptoms, this pregnancy consistently depleted me in ways prior pregnancies had not.

The morning's routine OB visit would most likely confirm some sort of Braxton-Hicks false alarm and leave me with instructions to "take it easy" for the next 6 weeks.  At worst, I thought I might be sent home for more formal bed rest.

One routine ultrasound, non-stress test, and doctor's appointment later, I was walking into the hospital admissions to be monitored and given further tests.  The routine blood screening results pointed to a completely unsuspected problem, I met the high-risk pregnancy specialist, and short term monitoring ensued.  My dad transferred the kids to Jim as the morning's tests stretched into the afternoon.  My comfortable clothing was vanquished for a hospital gown while night fell outside the windowless triage unit.  Around the time the hospital kitchen closed for the night, I was informed that the doctor had ordered a 24 hour test and I wouldn't be going home until the test's completion.  Everything was weird, but I still expected to return home pregnant.


Around midnight I moved to an actual hospital room.  With a hospital gown, fetal monitoring cables, rampantly unshaven legs (think wookie), and a pregnant woman's bladder, the en suite bathroom was a welcome change from regularly walking down a public hallway with cables resting over my neck (hiking up the gown in awful ways).  When the nurses confiscated my cup of water in the middle of the night, I wrote the whole situation off as a need for fasting bloodwork.  I slept fitfully for a few hours still thinking I would return home within 24 hours.

Shortly before dawn, a technician filled vial after vial with blood.  My water cup made no return appearance and a nurse put me on an IV.  Something was afoot.  I texted Jim and my dad about this, but didn't make the cognitive leap.  I called my mom (she doesn't text) and said that I might be being prepped for something, but the 24 hour test wouldn't be over for at least 12 more hours.

A couple minutes later, my OB walked in the room and told me that she couldn't sleep at night because my first round of blood work results were mysterious and alarming.  That morning's results were even worse, and I would be having the baby in about an hour.

It was then I knew I had made my first mistake
I had less than an hour to get Jim there, arrange impromptu care for the kids, and inform my parents (who live at least 30 minutes away from the hospital).  During a few frantic calls arranging the transfer of car seats and kids**, hospital staff started surgical prep.  I gathered up my few personal items and just tried to manage the logistics from a hospital bed that suddenly seemed to be on the other side of the moon.

One (accidental) look in the mirror told me that I shouldn't see the kids before surgery.  My typically scruffy appearance had turned from indifferent to unwell.  I wasn't quite ready to be cast in a zombie movie, but it no longer required blood work to see that things were abnormal.  I didn't want to scare the kids (and Ranger already dislikes hospitals), so I made more calls to make sure they didn't come to see me.  Jim made it just in time to prep and attend the birth.


Except for the expedited nature of the birth, everything else was familiar.  Same surgical staff and anesthesiologist as both of the other kids.  The recognizable experience lulled me into thinking that everything else would be familiar, even when they introduced me to a nurse from the NICU who take care of the baby after the birth.

In the swirl of the operating room, the great question of baby gender was finally answered: a baby girl, a new daughter, a new sister...


I got to hold her, this miniature doppelganger of earlier Jones babies, for a head-swimming moment

Then the NICU nurse rushed her off fearing respiratory distress.

The recovery room seemed quiet to the point of vacancy.  Despite all signs to the contrary, I kept hoping that the curtain would draw back and the baby would be rolled in.  Instead each tug of the curtain only revealed someone else with questions or tests for me.

Soon the my bed was on the move.  I was wheeled to our daughter's baby-warming bassinet in the NICU and able to hold her briefly.

In the NICU's bright lights and beeping alarms, I realized that our baby wasn't the exceptional case- the miracle baby who would elude the NICU and an extended hospital stay despite a premature birth.  She would not stay overnight in my hospital room.  She would have to gain weight and learn to digest food before she could leave specialists' care.

Then, like some twisted Mr. Toad's Wild Ride, I found my bed on the move again as I left our tiny baby in the care of others, well-trained strangers, but strangers none the less.


Hours turned to days as the baby and I struggled to normal functioning.  I came home without her, and Jim and I worked to be at the hospital for most of her medical tests and waking time (8 feedings, 1 every 3 hours).  She grew stronger, achieved milestones, and eventually was released into our care.  Soon she was in our chaotic home meeting her siblings for the first time.

*If you don't listen to Lyle Lovett, you should start immediately. And yes, Logan, I was thinking of Deer Creek when I wrote this.
**Thank you, Francie.  Your willingness to jump in and help with only moment's notice is extraordinary in both kindness and logistics.  You amaze me, friend.
***Baby Toolkit is the ongoing thoughts of two geek parents.  We are all doing well (except for a lack of sleep) as we adjust to this new routine.  Happy New Year, small print readers (you know we love you the most)!
Posted by adrienne at Thursday, December 30, 2010 7 comments:

Email ThisBlogThis!Share to TwitterShare to FacebookShare to Pinterest
Labels: meta

Half the Weight, Twice the Adventure: Pregnacy Goes Preemie 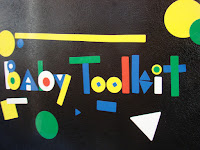 For months, I've been anticipating the announcement of Baby Toolkit's newest geek.  It's been hard for me to keep quiet for months about our baby in development, especially as this pregnancy has been my most challenging.  This may make my posts about specific foods a bit more understandable.

BabyGeek1.3 (yet to be nicknamed) conspired with my AMA (Advanced Maternal Aged) body for a Beta release.  More clearly put, she was born prematurely at a 34 week gestational age.  Her weight, slightly less than a little sack of sugar, is about half that of our older kids.  The strong family resemblance makes her seem a miniature of Ranger and Scout as babies.  Even at a tender young gestational age, our littlest girl exudes personality and family traits.  When she puts on her Elvis lip and it transitions into a sly half-smile, the twisted Jones sense of humor seems strong in this one.  She's also been driving a few of the NICU nurses crazy with her physical strength and persistent desire to kick off swaddling devices.

The health problems that precipitated her birth are resolving themselves quickly.  Our little baby is growing leaps and bounds in NICU.  Ranger and Scout look forward to meeting her in person.

In the crazy hours surrounding her birth I realized (with regret) that I have read almost nothing about pre-term babies.  We have much to learn right now.

We proudly welcome this tenacious new member to our family.