Blasts from the Past: Three Favorite Hacks from the Days of Yore

In the past few months, I've found myself periodically looking through the archives to answer friends' questions. I've stumbled into old hacks which long ago turned into nearly-invisible standard family operating procedures.

So, for the subscribers who haven't been around for all six years, here are three of our all-time favorite hacks. 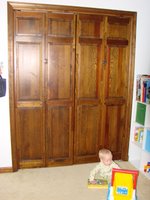 While not my first post, this hack is the one that made me feel a part of a larger conversation. My jubilation when Asha covered it on Parent Hacks still resonates. It's also a cheap, clean-looking preventative for pinched fingers. Our latches are still going strong six years later. 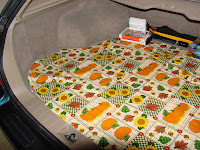 The Big Muddy: Keeping Stroller Gunk Out of Car Upholstery

Earlier this year I replaced this Thanksgiving tablecloth after years of use. I only wish the rest of the car had weathered those last five years as well as the cargo area. 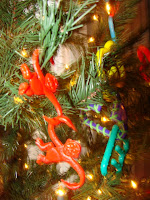 The kids still love doing this, and it means far less stuff to pack away after the holidays. I suspect Ranger will add some LEGO creations to the upper branches this year.

Thanks for strolling down memory lane with me, and thank you for reading Baby Toolkit!

***Baby Toolkit is a half dozen years' worth of hacks and conversation written by a couple geeky Midwesterners. Thank you for reading us! We're Amazon affiliates, so a small percentage of purchases through our Amazon links goes to help our operating costs online and in the real world. We also podcast about board games at Great Big Table.
Posted by adrienne at Thursday, December 13, 2012 No comments:

Yesterday, I heard screams coming from my daughters' room. This isn't really a surprise. When people talk about boys being loud, I always wonder how girls ended up with better publicists in that department.

So, as the cries didn't indicate blood loss or actual fear, I ambled back to see what was the matter. 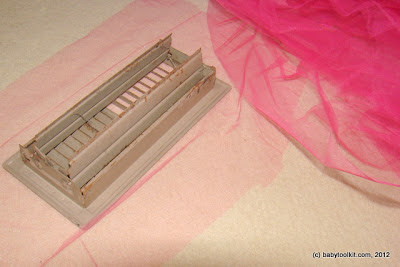 My girls were playing with poker chips (a favorite toy at our house) and the baby inserted one in the floor vent- to her utter delight and the complete irritation of sister Scout.

Now, I've known for years that their floor vent was a gaping maw hungry for toys and tidbits. It's one of the few floor vents that the previous residents didn't cover with window screen.

When I went to recover the chip, it was gone. It made it past the initial flat land and rolled somewhere toward the basement. For all I know it's now sitting on the electric coils of our furnace. Since they got past my arm's reach, this was no tea set spoon scenario; this situation required action.

I grabbed some very pink tulle and cut it about 5 inches larger than the floor register. This register fits pretty snugly into the floor, so I didn't bother duct taping the tulle around the boxy underfloor part of the register (as the previous residents had on the other vents). The next vacuuming may prove that to be a strategic error, but for now, it's keeping all the chips out of the furnace and the girls like their pinker floor vent.

***Baby Toolkit is the slapdash meanderings of a couple geek parents raising three active kids. When we're not searching floor vents for lost treasure, we're sometimes discussing board games at Great Big Table (mmm, delicious podcasts!). We're Amazon affiliates, so clicking through our relevant links and purchases increases the Jones' coffers. We don't have any vested financial interest in tulle, floor registers or poker chips. Do you?
Posted by adrienne at Wednesday, December 12, 2012 3 comments:

Recommended Reading: Some Favorites from 2012*

Should a genie offer me a bonus hour for every day, I would make lots of plans and promises for that time. And then I will spend it reading. Actually, I wouldn't because literature clearly teaches never to trust genies.

I love books and stories. My Twitter feed is usually peppered with current reads, new recommendations from friends, and other book talk. I neglect Pinterest and totally abandoned Facebook, but I usually read my daily notifications from Goodreads.

While I have tried to limit my bookish chatter to kids' books and relevant parenting titles, sometimes I can't restrain myself.

So, please forgive me as I shoehorn in a few favorite reads from this year under the guise of holiday shopping.

The Book My Dad and I Agree On:

Don't Ever Get Old by Daniel Friedman
Buck Schatz, a former police detective, goes on the hunt for a Nazi war criminal. Buck has personal reasons to bring the man to justice, but others are searching for the fugitive's rumored fortune in gold. Did I mention that both men are now octogenarians?

Buck's cutting and unvarnished opinions (which he considers the privilege of old age) made my septuagenarian dad laugh so hard that my brother immediately read the book. Then he called me and insisted that I read it too.

We are all waiting for Friedman's next release.

The Book I Immediately Bought My Brother (After Reading a Library Copy):

The Sisters Brothers by Patrick deWitt
A Western noir. Modern sensibilities, sibling conflict and affinity, and dialogue so bewitching that I wanted to every word of it aloud to bystanders.

Shortlisted for the Booker Prize.

The Book I Stole from Jim's To-Read Pile -or-
The Best Dystopian Novel Explaining the Eighties Geek Zeitgeist:

Ready Player One by Ernest Cline
If you can remember being really excited about getting an Apple II to display your name or you ever programmed onto an audio cassette, this book will speak to you. I have long thought that the young geeks and gamers of the eighties were conferred a special blessing by history.

This novel about our nation gone wrong (via global warming, hyper-commercialization, and other present-day headlines) offers insight into that strange decade and those who came of age during it. While it's a great dystopian novel for any geek, Eighties geeks may find it as generation-affirming as the Goonies was back in 1985.

The Quirky Book I Made Everyone Read

The Family Fang by Kevin Wilson
The Fangs specialize in family drama. Years of creating awkward scenes as spontaneous performance art have left the siblings known to the world as Child A and Child B with some serious emotional baggage.

Annie, now famous for her acting (and some unfortunate internet memes) and Buster, an entertainment journalist specializing in thrill-seeking exploits, avoid their parents at all costs. Until Buster finds himself injured and unemployed and Annie's career publicly implodes. Then their parents vanish leaving behind only a bloody van at an out-of-state rest park.

The Book That Carried Me Away

The Night Circus by Erin Morgenstern
Make sure everyone is well fed before you crack the covers of this one.

A grudge-match competition between two aging magicians results in a circus unlike any other.

The Princess Bride by William Goldman
One of my dearest friends asked me for a book to read while on the beach in Jamaica. She didn't really get into reading until Harry Potter, so I sent her back to this wonderful book behind the wonderful film of the same title.

Even if you have seen the movie a million times, the book is not to be missed.

Bellwether by Connie Willis
Sheep and the slings and arrows of corporate culture. The wry humor in this slim little novel just captured my heart entirely.

A trend-hunter working in an ever-expanding bureaucracy tries to find out why women bobbed their hair.

Sorry Please Thank You by Charles Yu
Delightfully unexpected stories that I just wanted to savor. Even though I read the book month ago, just this weekend Jim practically shouted "I'm reading that now," when I flipped open a library copy he checked out (and left on the kitchen table- I argue that makes it fair game).

The collection opens with a call center in the developing world that outsources pain and grief. It wanders through the Star Trek universe with a recently promoted redshirt in "Yeoman" (everyone who has seen Trek must read this). The 2-person skeleton shift in a big box store find a finger in the aisle, and then the zombie who dropped it. And (I promise I won't mention all of the stories individually) in "Troubleshooting"is so wonderfully mind-bending that it reminds me of the movie Primer.

And Not to Get Lost in a World of Fiction

Nothing to Envy: Ordinary Lives in North Korea by Barbara Demick
Want to know what life is like after electricity? This startling book looks at what happens when the lights truly go out.

Through interviews with North Korean refugees and expatriots, Barbara Demick draws a gripping presentation of a hidden nation and the people struggling to live in it.

This non-fiction work by LA Times' Beijing bureau chief made me recognize so many of my own cherished assumptions I have about modern life. This book tugs at the same psychological knots as zombies and futuristic dystopias.

There are so many more titles I could mention (don't even get me started about zombies), but I'm stopping now.

What great books are you reading?
Should I post more often about books like these- or just keep it on Goodreads?

*It took a lot of restraint not to title this post, "I like big books and I cannot lie."

***Baby Toolkit is a bootstrap blog written by Midwestern geek parents (between books, boo-boos and bedtimes). We're Amazon affiliates so a portion of purchases made through our links help pay our domain name fees and library fines (THANKS!). All of the books discussed in this post were provided by our public library and/or purchased by us (though we do selectively accept review copies). If you like board games, check out our Great Big Table podcast.
Posted by adrienne at Tuesday, December 11, 2012 3 comments: