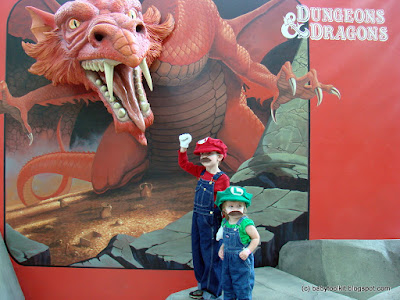 Long before we started loading the car, I knew Ranger was eager for GenCon Indy.  Last Halloween, when he first donned his Mario costume he said, "Let's go to the Costume Place [his name for GenCon]!"  For the next 10 months, every time he saw his Mario costume I had to explain that GenCon only happened once a year and yes, we would pack his costume.

We worried about how Scout would tolerate the crowds this year.  Last year, she rode in our awesome Kelty Town backpack where she napped a lot.  She was not yet a walker, so her independent nature wasn't insulted by the continuous carrying.  This year, she's a toddler who prefers running to walking and she only endures a stroller for short periods of time.  The backpack offers her a better perspective, but we couldn't imagine her quietly napping between intervals of waving and people-watching like last year.

And her brother wanted her to dress as Luigi.  I envisioned her felt mustache, hat, and overalls staying on for maybe 30 minutes before she demanded something more comfortable.  After filling my bag with snacks, small games, and a girly sundress, I crossed my fingers that her upcoming meltdown wouldn't deafen too many innocent bystanders.

After the long drive to Indy, Ranger was so excited to change into his Mario costume.  Scout was far less enthusiastic to change clothes.  We had to park in a nearby mall parking garage and take skyways to the convention center.  When we entered the elevator to enter the mall Luigi was whining in her stroller and Mario was bouncing off the walls.  Then the elevator doors opened to a chorus of "awwwww" spouting bystanders and Jim and I magically transformed into celebrity handlers.  We weren't 10 feet out of the elevator when the first person asked to take the kids' photo.  The photographer was a mall shopper, not even a con-goer.

Scout has strong social instincts and relished the attention.  Ranger can be shy, but as Mario he's unflappable.  As we neared the convention center and met more costumed people, the kids filled with excitement.  Their euphoria reminded me of childhood Halloweens and returning to summer camp.

Within our first hour at GenCon, Luigi was kidnapped by the World's Tallest Leprechaun.  Her casual attitude about towering over all the people surprised us.

The kids got to meet icons of our childhood like Zelda's Link, Alice's Mad Hatter, and the Duck Hunt Dog (with Ratchet) . 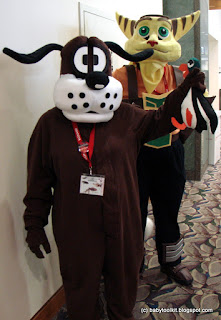 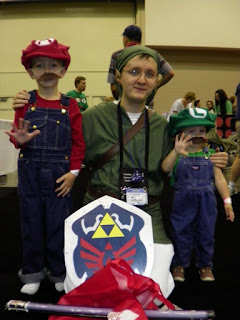 They also picked up world-domination tips from the villainous, venomous Cobra Commander: 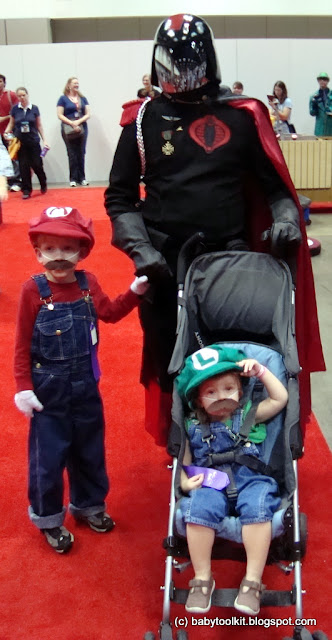 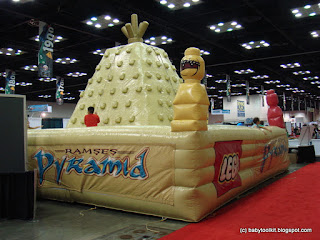 The next few days were a bit of blur.  Jim and I stayed up way too late trying to solve Puzzle Hunt 9 the night after the family scoured the convention hall for all the clues.  The kids insisted on wearing their Brothers Plumber costumes every day and relished all the smiles, waves, and high fives that resulted.  Ranger climbed and bounced around LEGO Games' giant inflatable Ramses' Pyramid at every opportunity.  We played demo games, tracked down some titles we've been looking for, and people watched. 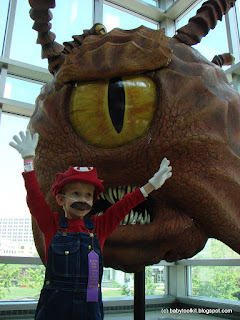 We also ran from the Beholder, swam in the hotel pool a lot, spent time with old friends, and enjoyed being back in the Circle City for a couple days.  The days were splendid and jam-packed.  We all wanted it to last longer and are looking forward to next year.

Keep an eye out for upcoming reviews of the games Ranger and Jim played.


***Baby Toolkit is the ongoing saga of geeks with kids.  We're Amazon affiliates, so a small portion of purchases made through Amazon links on the site does come back to us and we use it to pay for connectivity (thanks!).

Photos (all but Link): (c) babytoolkit.blogspot.com, 2010 all rights reserved.  The Link photo is John Stanifer's (Link).
Posted by adrienne at Saturday, September 25, 2010

Your kids look so cute all dressed up. Just sent a link for your Mario costume tutorial to a friend who's nephews are dying to be this year for Halloween.

This reminds me so much of waiting all year just for GenCon when I was a kid. Those four days can never seem to come too soon! :)

A-dorkable. It makes me think of PAX East. You should totes come out for it. It's AWESOME!

Hey, I'm sorry I missed this post for so long! I was Link in that picture. I have to say, that's by far the most adorable picture I posed for during the weekend...

My sister happend to Google my name this evening, and this was the first thing that popped up in Google Images. Ha!

Nice write-up. I can relate to your son. I'm normally not that nervy of a person, but when I went as Mario in 2009, it was like I had eaten a Fire Flower. I was totally into the pictures and all the hanging out with other cosplayers and the whole experience felt like I was in my element!

I talked about this a little bit on my own blog:

Hopefully, I'll run into you guys in 2010. You'll be easy to recognize, even without the Mario and Luigi costumes. I'll be going as Harry Potter next time around!