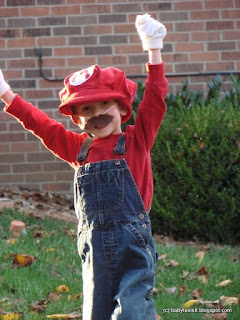 My favorite Halloween costumes have function beyond the holiday. Before his first Halloween, Ranger's grandparents gave him a cowboy outfit, so we just added a Western hat to complete the costume.

I found an old chef's coat at a thrift shop, so Jim and I talked about a mad scientist costume (in the spirit of Dr. Horrible), but that amused us more than it would Ranger.

Cruising Dabbled.org's great Halloween coverage, I found a great costume that would delight Ranger and satisfy my hopes of reuse. (Thanks, Dot!)

Ranger follows the adventures of Mario in Kart , Tennis, and Strikers via Nintendo. When he saw the Flickr photo a Mario costume became a regular topic of conversation. I launched the hunt for a long-sleeved red shirt, denim overalls, white gloves, and a hat (or sewing pattern).

By Sunday, I had everything but the hat. Jim helped me search through pattern books for a good match and we settled on Simplicity 2808 (note for sewists*: this pattern is for adult sized hats as we're big-headed folk). Ranger's preschool Halloween parade was Thursday, so I spent Tuesday and Wednesday nights as an amateur milliner. The hat needed to look cartoonish, so all errors in tailoring could be deemed value-added features.

Jim fashioned Ranger's fine mustache from brown felt. I attached it to a loose-fitting loop of thin, soft elastic which fit over the ears and behind the nape.

Thursday's parade went well. Even the people who didn't know about Mario (like the nursing home residents who Ranger's class visited) loved his mustache. 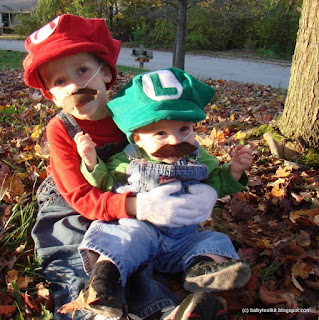 On Friday afternoon, I noticed a long sleeved green onesie in the Raptor's closet hanging near her overalls. When I told Ranger about this, we both came to the same conclusion. On Saturday, Jim, Mario, and the Ranger hit the fabric store for more elastic while I sewed against the clock.

If you want to show off a homemade costume to people who will appreciate it, go to the fabric store on Halloween. Ranger got full rock star treatment from both staff and shoppers and EVERYONE knew about Mario. I think he preferred it even to trick or treating.

They returned home and one mustache later, the Mario brothers were cavorting on the front lawn. 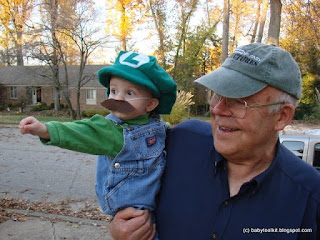 Mario Golf (why isn't this available for the Wii) while Luigi mostly laughed and pointed.

Luigi's hat is also an adult size large. I sewed a tuck in the back of the hatband to size it down. The large size makes her look more like Baby Luigi than Luigi and it leaves us the opportunity to reuse the hat set as the kids get older. Plus, I can wear it too.

Happy Halloween!
*Yes, this is an emerging word, but neither seamstress nor tailor really seemed appropriate and sewer (to me) always starts with a su sound and bears an entirely different meaning, so sewist it shall be. Feel free to suggest better terms.

***Baby Toolkit has received a Nintendo DS and a review copy of Mario Tennis from Nintendo. We have no fiscal interest in nor undisclosed relationship with Nintendo nor its parent companies. Baby Toolkit is written by geek parents who can be seen driving around town in felt mustaches.

Oh wow, they look fantastic and absolutely adorable! I am envious of your sewing (sewist?) abilities :)

Makes me feel almost ashamed that I buy mine. But, I only quilt; I don't sew, so that's my excuse :).

I love the Ranger & Raptor's costumes! *and* that you can wear the hats, too!!!!
Our costumes this year wound up being all clothes/props from the dress-up bin. Thank goodness we still have some items that fit Marjorie -- though the pickin's are slim. She wanted me to purchase a Harry Potter "dementor" character costume, and I just couldn't do it. Partially b/c I'm cheap, but partially b/c it just seemed yucky & plasticky (my own made up word).
Hooray for your original creations & the enthusiasm with which they were received by kiddos & their adoring fans. Liked seeing the pic with your dad, too!!! Thanks so much for sharing!!!

too cute!!! love the 'staches. those would be fun to play dress up with. I may need to make some for my kids!