Welcome to the House of Fun: Toddlers In A Cardboard House 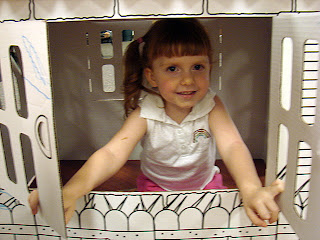 We spent last Saturday at a family reunion. The facility is great for big kids, teens, and adults, but it lacks much for the under-5 set.

With four under-fivers in attendence, I wanted to bring along something to hold their attention.

At Sam's Club, I found a $19.95 cardboard playhouse by Dalmation Press (don't bother Googling for the specific playhouse or the press, neither seem to have any presence on the Internet- I just wasted half an hour looking). 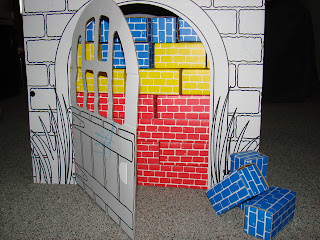 With 2 doors and two windows and four kids from 4 to 23 months inside, it resembled a clown car- especially as they drug it around the room with varying levels of agreement from its inhabitants.

Good times were had by all. We disassembled it and brought it home. With the heat wave, it's been a great entertainment for housebound Ranger and I. Admittedly, I started playing Cask of Amontillado with his cardboard bricks on day 3, but we both found it entertaining. Ranger would exit the back door to come check on the wall's progress from the outside.

All in all, it's not as cool as what you can make with Mr. McGoovy's Box Rivets, but it's small, semi-portable, and can keep toddlers entertained for hours.
Posted by adrienne at Saturday, August 11, 2007

When I was a kid we had a cardboard playhouse. It was quite a bit bigger and much beloved. I also had a cardboard kitchenette. I loved it too. During the summer it migrated to our covered patio. Unfortunately the neighbor-girl left a piece of half-eaten hard candy in it. It was overtaken by ants and then sprayed with RAID (what were my parents thinking?). That smell just never went away. The playhouse lasted until my folks got sick of it taking up so much space.

I've mentioned wanting to find a cardboard domicile for the girls and most people look at you like you're crazy. I've pondered building something similar out of foam core.