Sound Effects: The Batman Approach to Dressing Your Baby 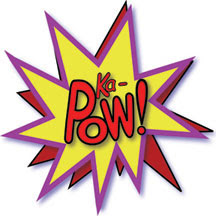 As soon as BabyGeek started gaining control of his flailing limbs, he became quite helpful in getting dressed. Rather than resisting clothing, he helpfully pushes his little arms and feet into clothing presented to him. Granted, this may be a sign of his dislike for cold air or nakedness, but we prefer to see it as a bi-product of our own silly behavior.

Before he was born, I had never dressed a newborn- or really anyone younger than myself. Come to think of it, I probably hadn't dressed anyone other than myself.

My method of dressing him was to slide my hands through the cuffs of his pants, through the waistband and pull his feet through. A similar method was employed in pulling arms through button-up shirts' sleeves. Onesies and other garments without front openings were befuddling. I would put his head through the large hole and then fish his arms out.

I picked up a habit from my husband of using the comic book phrases that appear on the old Batman episodes whenever his hand, foot, arm, leg, or head appeared through the proper hole.

BabyGeek loves weird sound effect words when they are delivered with gusto. We like to think that his ready participation in wardrobe changes is motivated by our enthusiastic sounds. He also gives a slightly disappointed look when changed by someone not making sounds.

Does this work? Or are we crazy? (not that the two scenarios are mutually exclusive....)

The super cute comic book buttons shown above are made by disturbedpenguinpoo and sold on etsy.com
Posted by adrienne at Monday, December 25, 2006