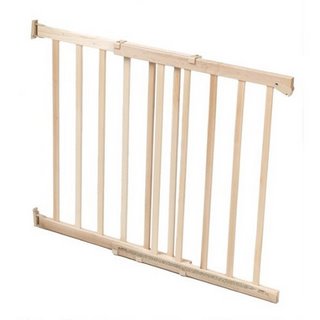 We installed an Evenflo wooden "top of stair" gate. It's marvelous at keeping BabyGeek from falling down the Alpine slope our home's designers saw fit to include. The gate works fabulously at keeping Baby geek off the stairs. It also works well keeping GrannyLuddite on the stairs. My mom is completely incapable of operating the latch. Honestly, it also took me a few frustrating days before I could consistently use it. It's not a techie/non-techie thing either. It's just a stiff latch that works counter-intuitively. For the top of the stairs however, I am quite happy to have a sturdy gate. After a few days of using it you forget it was ever difficult until, of course, someone comes over to visit. [Granny has now mastered the latch after a few more visits.]

We have a handful of these that we move around the house as needed. Remember when you're choosing a size that you are often going to have to step over and periodically will be required to hurdle whatever pressure gate you choose, so your height should probably influence your choice of gate. 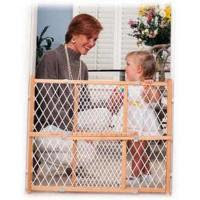 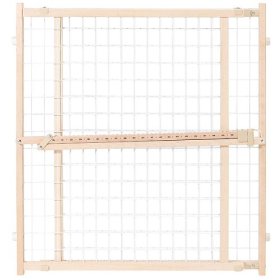 [Again, BabyGeek may try and scale this gate via the adjustment bar, but he rarely gets access to the forbidden side, so we simply don't know.] 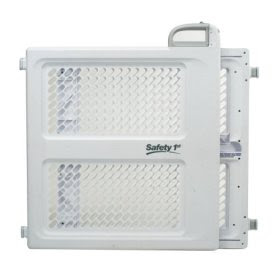 What kind of gates do you like or loath?
Posted by adrienne at Thursday, December 14, 2006


We too use the Evenflo wooden gate, in no less than 3 locations in our house. Yes, the sucker can make things interesting for guests, but thus far neither the toddler nor the dogs have been able to delatch it. After the initial week of pinched fingers, most people catch on. We use them at the top of our stairs (about 3 feet from the top stair, so no risk of climbing over it to fall down) and then to divide the child part of the house from the dog part of the house. I find them better than other gates as they can be left unlatched, but still closed and the dogs will not try to enter, however the child has access to the kitchen and knows how to close the gate to keep said dogs out.

We have that Saftey 1st swing gate. Like all men, my husband does not read directions, thus, he had a terrible time installing the gate. But once he read the directions and screwed the ends into the wall, the gate worked fine. It's easy to open and shut, it's sturdy, and it matches the mental hospital white of our apartment walls. The only thing that he messed up on was leveling the bottom latch-so when shut, it will shut, but with some wiggling and meddling by a curious infant that is also cruising, it will become undone. Nevertheless, there is that top latch that is very secure and very stable and very unable to wiggle free by an adult, let alone an infant.