Micras Are A Mom's Best Friend: Leatherman Tools Repeatedly Save the Day

Jim has long been an aficionado of the folding multi-tool. His accolades of the full sized multi-tool have prompted us to buy an engraved one for a priest at his ordination into an order that avoids personal property (although he is able to keep gifts received at his ordination). We both thought that if someone needed a practical life-long gift, a quality multi-tool would be hard to beat.

One of those long ago Christmases I received a twin to Jim's multi-tool: a Leatherman PST II (now discontinued). It was versatile, but heavy. After it ripped through some pants' pockets (the belt case was just over the top for me), it was relegated to my work backpack. This system was okay, but it seemed the tool was rarely with me when I needed it. The scissors were so tiny they were only marginally functional (like the Swiss Army scissors of my childhood). It really was too heavy for daily transport.

When the Micra appeared on the market, I mentally cataloged it as a possible gift for the geeks in my life, but didn't buy one for myself until finally stumbling upon a stainless steel one on clearance at Target. I was pretty sure this tool would also end up in the dark void of my backpack or glove compartment after proving itself a better concept than reality, so I didn't want to invest much. Jim thought it absolutely stupid; way too small for practical use. 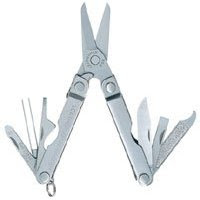 The Micra had scissors and tweezers, so it would wander in and out of my life for the next few years. Jim eventually bought one too when he got tired of borrowing mine in public. His was sheathed in red plastic (which cracked and came off- leaving the Leatherman unharmed- they now paint the metal rather than putting a translucent plastic shield on it).

My friend Beth who frequently borrowed it simply called it "the man tool." I was never happy with this moniker as most men I know pride themselves on carrying big tools, but in our household the label has stuck.

As we prepared for the baby's arrival, I found myself constantly borrowing his (as mine was AWOL). It was great to open boxes, cut off tags, access screw-on battery covers, and assemble baby gizmos. My Micra was eventually relocated (shortly after I lost Jim's) and has become a daily passenger in my pocket.

It has been one of our favorite tools for daily living with children. So far, it has:
This mini-tool is one of those rare, wonderful items that makes one feel like a superhero (to the rescue!). My only problem with the Micra is remembering to put it in checked luggage when flying. 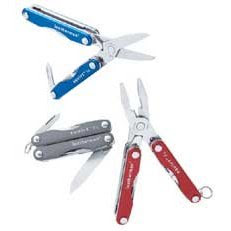 For those who prefer a key chain sized tool, the Leatherman Squirt S4 appears to have much of the same functionality of the Micra in a slightly smaller format. Either tool should fit easily into a Christmas stocking or a diaper bag.

Now, what color should I get for Jim?
Posted by adrienne at Sunday, December 10, 2006

We gave Grandma a Leatherman Micra as a gift. Turns out she uses it all the time. She keeps it in her purse and that never leaves her side. She was impressed with the strength of the scissors and uses it regularly. It's a great tool no matter who you are.