MoMamas Got a Brand New Bag: How a Diaper Hack Became a Business

Posts have been pretty sporadic here for the past month. It wasn't the holidays slowing me down, it was a hack gone wild. 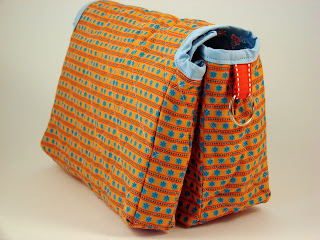 After a couple months of visiting public changing stations, I knew that the practice of digging through my large diaper bag (I love the Land's End “Do It All” diaper bag and backpack diaper bag) for supplies was not one I wanted to continue. It was hard to figure out where to set the bag, and I would always need something mid-change that wasn't on hand. It was like combined juggling and plate-spinning with a squirming, potentially fluid-erupting infant in the midst.

There had to be a better way, so I went to Google. The solution seemed at hand. I bought a popular envelope-style diaper carrier. It promised to hold four diapers, diaper cream, and a wipes case. Promises, promises. It could hold all those things, but not at the same time. Hunh.

So I stuffed in my wipes case, 2 small diapers (BabyGeek was only in a size 2 when this all happened), and distorted the bag to the point the seams wailed in agony by adding a very necessary tube of original Desitin.

There was one distinct advantage to this system- now Jim could take just the little envelope to the public changing stations when we were out, so the big baby bag no longer needed to visit the Men's Room- or the Men's Room floor.

There were problems though. When ever I wanted any single item out of the bag (with the exception of the diaper cream which is never used alone), the entire bag would have to be unpacked to remove an item. Pull out one diaper and the other one flops out. Want a wipe? I'd have to pull out the diapers too if I wanted to get the case back in the envelope. Still, it beat the alternative.

Some of my friends bought the same carrier after seeing mine. Others, often parents with more than one kid in diapers proclaimed it "useless."

After long talks with my friend (and SuperMom to twins) Veronica of Allie Bug Creations , I had ideas for a truly functional case.

With limited sewing skills, I sat down and made my own diaper carrier. It worked well, but looked like something made by a less-than-talented Brownie Scout. Jim and I both liked its function, so the diaper envelope was set aside and forgotten. Originally, I had thought I would make a few more for friends, but my sewing was such that I couldn't imagine anyone else being willing to take one in public. However, I was proud enough of the design that I could take my mis-sewn hack wherever we went. Jim, whose degree in Art was apparently overwhelmed by his Computer Science pragmatism, loved it too- but for function rather than form.

Jim's Aunt Mo (who started her working career as a professional tailor for an old-school, up-scale department store) saw the little bag when we visiting at her house.

Mo: “Made that yourself?”

The matter seemed forgotten until Mo retired about two months ago. I get a call:

“Why don't you drop off that bag over here, and I'll see what I can do with it.”

Unwilling to part with my sad prototype (and embarrassed to give her that particularly bad example of my work), I spent a few days making a vastly improved copy. It had all the niceties I couldn't manage on the first bag (like topstitching).

BabyGeek and I dropped it off. A few days later Jim brings home Mo's version of the bag. It was obviously the handiwork of a professional, but she made a few brilliant revisions to the design. 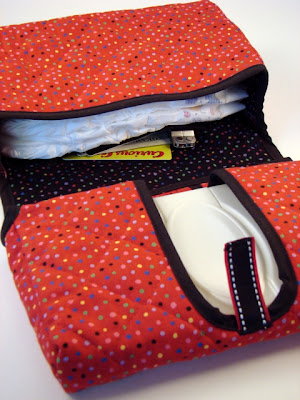 So here it is- my little hack all grown up, and I think it beats the pants off a Ziplock baggie.

It, the Diaper Valet, holds at least 4 big diapers, ointment, and a refillable wipes case all at the same time. The vertically-oriented diaper pocket makes for easy inspection, removal, and refilling of contents. The pocket has a large capacity despite its compact exterior dimensions.

We even added a little pocket with a Velcro closure inside the big diaper pocket to hold smaller items like ID, cash, receipts, credit cards, and even a Leatherman Micra.

We decided to capitalize on the handy and refillable Huggies wipes case's pop-up door. We made the wipes easy to access without removing the case from the bag. The pocket that holds the wipes case can also serve as a pop-up dispenser for standard, unboxed facial tissue (we discovered this by accident). 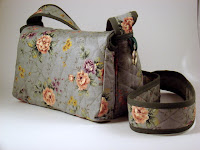 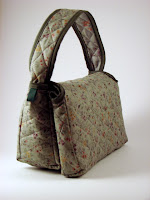 Sturdy ribbon side loops were added to attach keys, toys, and carabiner clips. A ribbon-topped Velcro closure pulls it all together, neatly accommodating a variety of payloads.

The Diaper Valet is made of quality washable materials and retails for $30.

We can also put handles on the Diaper Valet if you prefer something more purse-like. Long handles are an additional $6.50; short handles are $5.

If you want to learn more about the Diaper Valet or our small company, MoMamas, please visit www.diapervalet.com. I promise that I don't sew a stitch on them.

Otherwise, things will soon be returning to normal around here and posts will resume a more frequent pattern.

If there were a keychain ring/attachment on both sides of the Diaper Valet, then straps could be added by clipping or knotting onto the rings. This would make the bag a bit more versatile, because the straps could be removable and people could get both lengths, or an adjustable strap, or use an existing scarf, belt or other handbag strap.

We have side loops on both sides of the bag. One of them comes with a key ring already attached.

I love the idea of using a scarf or belt!

Thanks for the ideas-
adrienne

Your bag looks truly original and innovative! I sell designer diaper bags, but I always tell folks that the most important thing is that they find a bag that matches their lifestyle (and their pocketbook). Good luck on your design!

oh man, that is awesome! if we didn't see toilet-training on the horizon I'd have to get one. great hack!

I'd love to try this out, I use an Eagle Creek Stuff sack as my mini diaper bag.

Anything that makes the whole diaper experience easier is worthwhile in my book..