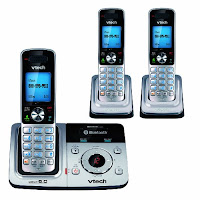 In the fall our cordless phone's battery life finally flatlined. Its standby time made the life of a gastrotrich look epic. The very weak signal made all our (very short) phone calls sound as if they were happening on a highly trafficked heliport.

I bought another phone. A lovely system with 3 handsets, a base with answering system, and two charging stations. Now I could grab a cordless phone downstairs, in the kitchen, or in our room. I settled in for a new age of convenience.

But my cell phone kept ringing, especially when both kids napped and I was finally settling in with a book. The easily accessed cordless phone was impotent when a persistent, child-waking wail was coming from a coat pocket, somewhere in my backpack, the kitchen counter, or wherever the young agents of chaos has decided to place it.

Mr. Pavlov would be amused to see me drop whatever I was doing and sprint around the house on a frenzied scavenger hunt to make the bells stop ringing. If I was downstairs, the phone was upstairs (or vice-versa). If the phone and I were in close geographic proximity, it would be usually be hidden in some crazy Russian stacking doll arrangement of bags, pockets, and or toys.

Usually, when my hand made contact with the phone, it would immediately stop ringing. I used to make the rookie mistake of checking the display and attempting a return call, but before I hit send my home phone would begin ringing- far,far away. Let the games resume.

About the time I started leaving the cell phone in the car, VTech offered us a chance to review their new cordless phones. When I skimmed the email, their DS6321-3 looked like a direct competitor to my existing phone. As I was about to hit delete I noticed the phone's killer apps: it connects by Bluetooth with up to two cell phones AND it imports cell phone directories.

The review phones from VTech (retail value $100) have been our primary household phones* for a month. My naptime sprinting scavenger hunts have ended.

As long as a cellphone has Bluetooth activated and is within 30 feet of the base, any handset can receive incoming and make outgoing calls. The Bluetooth radius includes our upstairs kitchen and living room as well as the entry area downstairs where I often leave my coat. If I'm downstairs doing laundry, I can easily answer my cell phone when it's in my bag upstairs. If everyone is napping, and my coat is ringing downstairs I can answer it two places upstairs. My sprinting skills can now being applied to important things like wolf attacks and glasses of juice poised on the very edge of the table.

Proximity of the cell phone to the base can affect call quality. When the phone is nears the outer reaches of Bluetooth communication voices began to sound robotic and signal noise increases.

As new users of Bluetooth, we were surprised by how much it shortens the life of each battery charge. I often put my cell phone on a charger (which I'll review soon) when I'm home to counteract the constant Bluetooth power draw. There's nothing different about power use with VTech, but it is a factor to consider if you're considering this system as your first Bluetooth device.

Each handset can also set the ringer volume for the whole system and retrieve messages from the answering machine on the base.

I put a call on hold (cell or home) to answer or make an outgoing call on another phone. The handset displays caller id information from the cell phone.

Cell phone directory import is really helpful. The cell directories are saved in the system and can be accessed even when the cell phone is not connected to the system.

Jim's LG VX8360 imported flawlessly. My Nokia 6205 (no, we're not smartphone people) only imported the numbers but didn't import the names or number types (e.g. home, cell, work). After a call to tech support, it turns out my phone is incompatible with the system. A few of the compatible systems are listed on Vtech's website, but prospective purchasers might want to call Vtech (800)595-9511 to check compatibility of unlisted phones. Even with the import snafu, I was able to update the entries manually without retyping all those phone numbers. For me, it was a worthwhile effort.

Accessing the cell directories feels cumbersome as a user must navigate a few screens to make a call.

Dialing from the cell directory on the land line was a bit confusing as first. The numbers show as area code and seven digit phone number. The phone doesn't recognize whether it is a local or long-distance number and will dial (xxx)xxx-xxxx if you press send. Neither long-distance nor local calls worked as listed in the cell directory when making calls on the home line. After looking at the manual it turns out the user can toggle between all multiple dialing options with the # key. One press on # makes it long-distance dialing [1(xxx)xxx-xxxx]. Two make it local (xxx-xxxx). Three make it intra-area code long distance (1-xxx-xxxx). Four returns it to the cell listing.

The handset's speakerphone function is really handy while multitasking. Good hands-free function means I can laugh with a good friend while chopping vegetables or type two-handed when I need to look something up. Speakerphone also means the baby can say hi to Grandma without hanging up the phone and that Ranger can tell Jim all about preschool without holding a cordless or cell phone to their head. Recent information on phone radiation and kids makes me wary of them holding any wireless handset to their heads.

The VTech DS6321-3 also allows for the connection of Bluetooth headsets (which emit far less radiation then cordless and cell phones). There are no jacks on the handsets for wired headsets.

The two remote chargers only require an electrical outlet, so they can be placed regardless of phone outlet availability. Because of the phone's digital nature, we put the base and charge stations on surge protectors.

The handsets are compact, but they lack a clip or other hands-free carrying option.

Summary:
We really like the VTech DS6321-3. The simplicity of receiving calls from two phone systems on the same handset removes some stress and chaos from our home. Not having to look up phone numbers on the cell is handy.

The speakerphone options make it possible to take a call and change a diaper at the same time.

It was disappointing to have only a partial import of my cell directory, but even the limited data saved me time in creating a tool I use daily. With compatible phones the import is fast and easy.

We're impressed with how many things the handsets can do. The phone would be improved by a quicker method of accessing cell directories, but the handset menus are generally well designed.

On our long term wish list, I would like to see VTech move toward lower radiation DECT phones which eliminate or reduce broadcast signals when the phones are not in active use. Then they can add a belt clip.

*We always keep an old-school wired phone on our land line, and we strongly recommend that everyone have an unpowered land-line phone which can operate in power outages and emergency situations.

***Baby Toolkit is the independent opinion of geek parents who do not miss their impromptu sprinting, hurdling, and vaulting workouts provided via modern telephony. We received a VTech DS6321-3 phone (MSRP $100) from Vtech's press agents, but we have no financial, emotional, or other notable relationship with VTech or its affiliates. We are Amazon affiliates, so we do receive a small portion of purchases made through our Amazon links. (c) Baby Toolkit 2010.
Posted by adrienne at Friday, February 19, 2010

The model reviewed is DECT 6.0.