Post Pregnancy Acne: An Answer You Can Sleep On 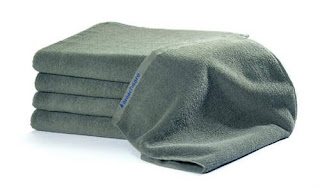 About a month ago, a friend with a newborn recently commented on having the worst acne of her entire life. She made me feel a little better as I've been having similar problems since the Raptor's birth. A few months after Ranger's birth I had similar problems.

Since the Raptor is still nursing, prescription medicine is problematic. That's why I had to try the potential solution Jim saw on Reddit last week. Not only was it non-chemical, it was cheap and easy. As I already do laundry all the time, I really had nothing to lose.

So every night for a week, I've slept with a different clean towel on my pillowcase (I told you it was simple).

The redness and irritation diminished visibly in two days. By day 3, areas that had been persistently irritated for weeks started to fade. After 7 days only a few active sites remain and new acne (thank you post-pregnancy hormonal shifts) are tiny and dissipate within 48 hours.

My skin feels better and has an improved appearance. I suspect that the loft of the towel's loops lets the air circulate under the face. The increased air circulation discourages the growth of bacteria by keeping skin cooler and drier (increased evaporation). Maybe it's the placebo effect or laundry voodoo, but it makes the mirror less miserable every morning.
Posted by adrienne at Wednesday, October 07, 2009

Hmm. Just the opposite for me. Great skin while I was pregnant and nursing but after, not so much. I'll have to try this towel trick.

What a great non-chemical trick to try! Can't wait to share it with friends!

Its going to sound strange but this trick got me through many years of really bad acne and pregnancy acne.....smear on raw egg yolk and let it dry and leave on for as long as you can handle - 15 min or so. Do every night and you'll see a difference.

hm. i am going with laundry voodoo, and i will try it. i breakouts now worse than i did as a teen. :(

Both my OB and dermatologist were comfortable prescribing Finacea during pregnancy and BFing. Might be worth looking into if you're comfortable with it?

Towels are a great idea.