A couple weeks ago I dug out my 1990s Polaroid camera and film. It turns out Ranger is a huge fan of the technology. He LOVES snatching the photo from the camera and watching it develop (genetics, I think).

So I was soooo sad to get the news (from Jeremiah) that Polaroid film is being discontinued. In the face of an oncoming winter storm Ranger and I piled in the car to buy a small stockpile. While others crowded grocery stores for bread and milk, we hit the desolate film aisle of a warehouse store (before picking up some milk and forgetting bread entirely). 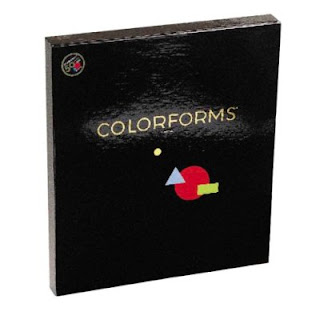 Meanwhile, a great item from the same era is having a comeback- Colorforms. And not the licensed-character driven ones, but the dignified geometric originals. Plus, they're currently [update: sale has ended and they're now only $5 off] $20 off list price at Amazon (Thanks, WantNot.net!).

***This is the unsolicited, independent opinion of the geek parents at Baby Toolkit. We have no financial interest in Polaroid, University Games, or Colorforms.
Posted by adrienne at Tuesday, February 12, 2008

Oh, I was so sad to hear about Polaroid. I always wondered if waving the photo while it was developing made it develop faster???

Apparently Outkast and conventional wisdom haven't kept up with the advances of modern techonology: http://www.cnn.com/2004/TECH/ptech/02/17/polaroid.warns.reut/index.html

This tells me how old I am...I was thinking "who is Outkast, and why is it spelled wrong??"
I still think they are wrong and shaking does help!
:)

My inner child threw a fit after reading your blog. The Polaroid Camera is one of those items that I have always wanted, yet never received. It goes along with the Commodore 64, Twister, Lawn Jarts, the Barbie Dream House, a baby sister, and the original Nintendo. I have purchased Twister for Miss B (and we both love it), but I've changed my mind about the Jarts.

You're right about the vintage Jarts- they were kind of scary when wielded by an older brother.

It looks like the baby sister is the only item on you list that can't be legally acquired on ebay. :)

I bought that set of colorforms for my daughter a couple years ago. I can barely get her to play them, lol. She is my more artistic kid too. She prefers virtual play now, oh my & she is only 6.

A) I mourn the loss of Polaroid film and am hoping another company will pick it up.
B) We have that colorform set and my 3 yr old son loves it. Heck I love it!