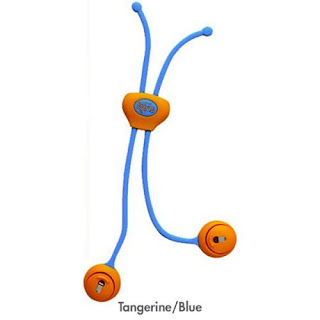 Before I had a child I usually forgot my wallet. Now I always seem to forget a bib. I just can't bring myself to invest in disposable bibs. Yes, they work beautifully and are really compact (my friends have generously given me more than one in a pinch), but they're not reusable which bothers me.

So, what's a parent to do? A clip to make a bib from on-hand objects (e.g. towel, paper towel, napkin, washcloth, t-shirt, heirloom baby quilt, bib) seemed pretty useful & compact. I saw a listing for a Kipiis

bib clip on Amazon, but couldn't find any reviews. At Kipii's site I found there was no bricks and mortar store carrying Kipiis within this state or any closely adjacent states.

I really wanted to try Kipiis out, so I wrote to Kipiis and asked for one to review. Kipiis was wonderful and sent one of the cutest baby implements I've ever seen. The material is pliable and smooth, and the rounded bright clips are modern and playful. The whole Kipiis has a charming cartoon robot look about them.

They adjust to such a long length that a breastfeeding mom could improvise a nursing curtain with a thin blanket, yet they are suitable when sized for an infant.

We found they worked well at home with a standard tea towel. For many babies, they would work well anywhere, but with BabyGeek the paper solutions (especially fast food restaurant napkins) were momentary. In defense of the Kipiis, the little guy is unusually bent on destruction and has always resented bibs. Our son has the soul of a test engineer, so he's always ready to take things apart- especially things that are not his. He tore through all the paper solutions faster than Bill Bixby's shirt shredded as it found itself housing an angry, green Lou Ferrigno.

His success in destroying his paper nemesis bolstered his confidence and he began operating the clips to his own delight. I'm sure this well-designed clip would work much better for a child not periodically hailed as "Destructo." 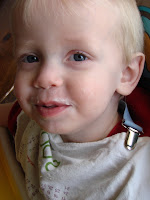 So BabyGeek (soon to lose this moniker) needed another solution. We started using a old school mitten clip (about 4 inches of elastic and those little metal chomper jaws) and a terrycloth or woven cotton tea towel. The clips hold on tight to the towel despite the geek's escape efforts and the latch is too small for him to operate (for now). The mitten clip also stays pretty high on his neck and generally out of his vision. The strength of the clips are such however that this improvised bib should only be used under supervision due to strangulation hazards.

One of the biggest advantages of the Kipiis (or the mitten clip) is use with a standard size kitchen towel offers ample coverage of the child's chest and lap. It's so much better than a regular bib, and I don't much like the pocket bibs (the thin vinyl ones don't clean well for me and always seem greasy in the pocket and the rigid ones are just a little 1940s sci-fi villain for me even with the teddy bear imprint).

I like the Kipiis alot and for the right kid's parents it promises a bright future of one less thing to remember when leaving the house. Sadly, we're just not those people. For the rest of us there are mitten clips and forever being bib-less at restaurants.

Would you like to have the gorgeous Tangerine & Blue Kipiis that Kipiis generously sent for review? If so, please send an email with the subject Yippee, Kipiis! to babytoolkit@gmail.com by midnight CST on Friday. The winner will be selected at random.

Have you noticed that the world seems to be filling with wonderful new people these days? Please join us in welcoming our dear new niece and new friends to the world: Welcome, Olivia! Welcome, Dylan! Welcome, Amelie! Welcome, Jonas!
Posted by adrienne at Wednesday, March 21, 2007

It looks too much like a toy. Nevertheless, I'd like to try it out with my kids. I've entered my name in the drawing.