Music to Teethe By 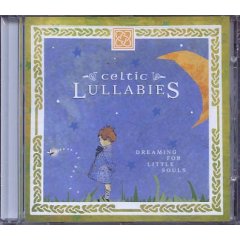 I didn't plan on writing today, but baby geek is so unhappy with his molars coming in that I'm resorting to music therapy to get him napping.

This CD was given to us by our very thoughtful obstetrician on the occasion of baby geek's birth. She offered a few titles to choose from and the sweet cover art on this CD drew me in. I didn't know what I would be getting musically, but the case would make a lovely coaster on the coffee table if nothing else. (This was early days when I still believed I could keep coasters on my coffee table that wouldn't immediately become baby toys.)

Reassuring (gentle, but strong) female vocals present traditional lullabies with Celtic instrumentation and interpretation. It's very peaceful for baby and bystanders. It's baby Valium with a touch of Prozac for beleaguered caretakers.

As he's gotten older and better at fighting sleep, the CD has lost some of its somnolent powers, but it usually calms him down immensely.

This is a great gift album for parents of newborns.